We will be adding an exciting new element to WARMACHINE MKIV in coming months: Defenses. Defenses are a new type of terrain feature that players take turns placing on the table after all standard terrain and terrain mandated by the scenario being used have been placed. Each player will have the option to place up to three Defenses for the first player and up to four for the second player. A player places their Defenses on their side of the table.

Our initial offering of Scenario Defenses includes Fire Pits, Powder Kegs, Wall Barriers, and Spike Traps. Fire Pits represent burning hazards on the tabletop that remove Stealth from models in their close proximity; Powder Kegs are explosive obstacles that must be tread around carefully; Wall Barriers are obstacles designed to slow extra-large and smaller based models; and a Spike Trap is an obstacle that damages enemy models moving in its close proximity. All obstacles are removed from the table if they are contacted by an extra-large or huge-based model.

Defenses will be added to the game once they are released in the next few months.

Here are the full rules for Defenses:

Defenses are small terrain features that players take turns placing on the table after objectives determined by the scenario and standard terrain features have been placed on the table. Unless otherwise stated in the scenario, after determining turn order but before deploying their models, players alternate placing up to three defenses each on their side of the table, beginning with the second player. The second player then has the option to place a fourth Defense.

Defenses cannot be placed within 2” of an objective. Defenses can be placed on top of hills if no other Defense has already been placed on the same hill and so long as the entirety of the Defense can be contained within the area of a level surface on the hill.

A player can place multiple Defenses of the same type.

A Defense’s terrain features may have additional placement rules.

Defenses are removed from the table if they are contacted by a model with an extra-large or huge base. 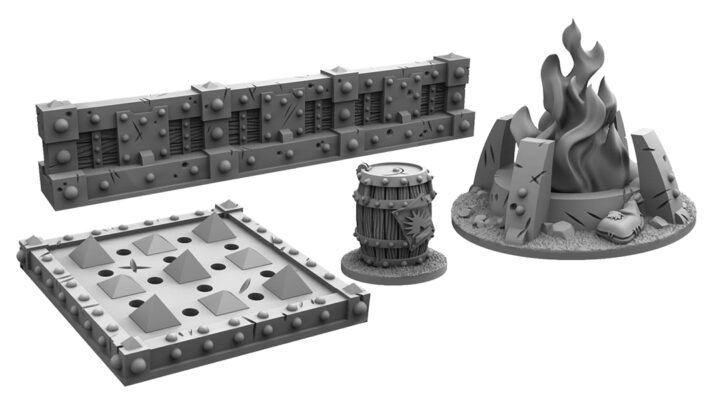 Models lose Stealth while within 5” of a Fire Pit.

A Powder Keg is an obstacle that provides cover to any model daft enough to hide behind them. Large- and smaller-based models without Flight or Pathfinder attempting to move through a Powder Keg suffer –2 SPD.

While within 2” of one or more Powder Kegs, a model’s ranged weapons gain +1 RNG.

Powder Kegs can also be targeted by ranged and melee attacks. A Powder Keg has DEF 5 and explodes if an attack results in a critical hit.

When a Powder Keg explodes, all models within 2” of it suffer a POW 15 blast damage roll, and the Powder Keg terrain feature is removed from the table.