Most of my exploits have occurred beyond the walls of civilization. When I’m not in the University’s library, I daresay I’m more comfortable swatting mosquitos in the Bloodsmeath Marsh than hemmed in on all sides by my fellow man. However, a student of extraordinary zoology must pursue the opportunity to observe such creatures wherever they are found, be that in the depths of a gnarled forest, or, as was the case with one particularly irascible and foul-smelling gorax, an abandoned factory in Filcher’s Crossing… 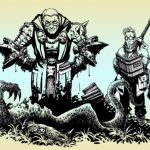 Renowned expert in all matters of unusual beasts, there are few individuals who have seen as much of Immoren as has Professor Viktor Pendrake—the High Chancellor of Corvis University’s Department of Extraordinary Zoology—and fewer still who have survived the experience and chronicled the tale. His foundational work, the Monsternomicon, gives a detailed account of the many unusual encounters he has faced in his journeys across the Iron Kingdoms and beyond.

To get the most out of these encounters, you will need a copy of Iron Kingdoms: Requiem and the Monsternomicon.

This encounter is suited for a group of 5th level characters, though only one character is likely to engage in dangerous combat.

Criminal enterprises do anything in their power to make money. Some groups explore methods beyond simple heists and muggings and find other ways to earn coin. A few enterprising gangs have set up spectacular pit fights in which contestants engage in gladiatorial combat, surrounded by a howling mob of onlookers who place bets on the victor—or survivor—of each bout.

One of the most popular spectacles pits a fighter against a ferocious wild beast. This format is more common in the pirate city of Five Fingers, but the practice has spread throughout the underbelly of the Iron Kingdoms. Arena beasts range from packs of blasting-powder-stuffed skiggs to captured gatormen and beyond, but among the most popular remain the vicious gorax. 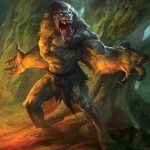 The Clement Street Cutters is a relatively minor gang that has gotten its hands on a large male gorax they have named “Stinktooth.” After smuggling the beast into the city, the Cutters began setting up nightly matches to pit humanoid fighters against Stinktooth. If the gang is lacking for volunteers, they simply kidnap an unsuspecting civilian off the streets, tie a knife into their hand, and toss them into the pit.

The encounter begins when the characters enter the Clement Street Cutters’ arena before the fight. Read or paraphrase the following:

Ten members of the Clement Street Cutters (gang cutthroats) keep the peace among the onlookers and accept wagers from those who want to place bets. If the characters try to interfere with the fight or are otherwise hostile, the Cutters converge and fight to incapacitate them—why kill those nuisances when they can add a bit of extra spectacle to the night by feeding rowdy attendees to Stinktooth? 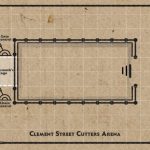 The arena is a simple fighting pit built into the warehouse’s lower floor and is about 10 feet deep. A 5-foot-high railing encircles the 20-foot by 40-foot rectangle. A ladder on the east side allows fighters to climb down into the pit. A heavy metal gate on the west side can be hauled open with a winch set above it and leads to where the Cutters keep Stinktooth. 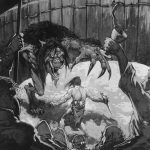 The cage set on the western wall of the arena is a simple 10-foot square where the gorax barely has room to lie down. The floor of this cage is littered with matted hair, bones of previous fighters, and clumps of the gorax’s waste.

Depending on why the characters are at the arena, one or more of them might want to participate. If the characters are investigating the disappearance of an associate, they see their compatriot led through the crowd hooded and shackled by a group of four Cutters and armed with a dagger before being sent into the arena. A character can choose to fight in the place of a captive—the Cutters don’t care too much who does the fighting, just that it happens.

If the characters came to the warehouse intending to fight, they simply need to announce this to any one of the gang members, who are fairly obvious as they work the crowd.

When a character enters the arena to fight, read or paraphrase the following:

Rules of the Arena

The Cutters’ rules are simple: no magic and the only weapon allowed in the pit is a dagger. Bouts last for three minutes (30 rounds) or until Stinktooth or his opponent is victorious. To prevent fighters from escaping, once the bout begins, the ladder on the eastern side of the arena is retracted for the duration of the fight.

At the end of the three minutes, the gorax is hauled back into his cell by a chain locked around his neck. The Cutters are trying to make a profit with each fight, however, and will abide by the mood of the crowd. (Nearly every rule of the arena is treated more like a guideline. Should the crowd begin to favor a fighter and try to provide them assistance, the gang is likely to look the other way.)

The gorax is a large, older male specimen with streaks of silver in its mane. Ropes of scar tissue crisscross both of its arms, badges of battle earned battling against a constant stream of contenders. A heavy chain attached to an iron collar around Stinktooth’s neck drags behind it, leading back to the cage on the western side of the arena.

Stinktooth uses the rules for the gorax presented in the Monsternomicon with the following changes.

Foul Breath (Recharge 5–6). The gorax bellows producing a stinking cloud of breath in a 15-foot cone that smells of rotting meat and decaying tusks. Each creature in the area must make a DC 14 Constitution saving throw or be poisoned for 1 minute. The creature can repeat the saving throw at the end of each of its turns, ending the effect on itself with a successful save.

Fighters in the arena can try to get the crowd on their side. During the bout, as a bonus action, a character can attempt a Charisma (Performance) or Charisma (Intimidation) check to rile the crowd and gain their support. The DC begins at 15 and increases by +1 for each subsequent attempt, either successful or failed. If a character attempts to rile the crowd after dealing 5 or more damage to Stinktooth, the character makes this check with advantage.

Rewards. The following are some potential rewards for successfully riling the crowd to a character’s favor.

Next to the winch that opens the gorax’s pen is another, sturdier one with a ratcheting mechanism on its toothed wheel linked to the chain holding the beast. As an action, a character can wind the chain in by 10 feet, shortening Stinktooth’s chain. The gorax starts the fight with 40 feet of slack chain, enough to reach the entire arena. Shortening the chain limits how far it can travel away from its pen.

Interfering with the gorax’s chain during a bout draws the attention of the Cutters and is likely to lead to a fight.

Characters can try to make some money by betting on the fight. Prior to the fight’s start, any one of the Cutters will accept a bet and give a character a marker that can be cashed in after the fighting ends.

The minimum bet is 5 gp. The payout amount varies depending on who the characters bet on and who is facing Stinktooth.

A character who volunteers to fight Stinktooth—and who survives the bout—earns 100 gp from the Clement Street Cutters in addition to any gold earned from placing bets.

The conclusion of the encounter depends a great deal on the actions of the characters.

An Offer You Can’t Refuse

If a character fights and defeats the gorax, the Clement Street Cutters are faced with a difficult proposition: their main source of income is either dead or too wounded to fight for some time. The gang might try to recruit the character who defeated the gorax as a new champion or could try to convince the characters to go find a new replacement beast for the arena. If the characters refuse and leave the Cutters empty-handed, the gang members might become rivals while the characters remain in the city.

The Clement Street Cutters aren’t the only group of ne’er-do-wells who orchestrate pit fights against wild creatures. A character who proved skillful enough to defeat a gorax might be recruited to fight against other, more dangerous creatures with an increasing profit for each victory.

If the characters are part of an adventuring company like a Mercenary Charter, Outlaws, or Pirate Crew, defeating the gorax in combat is a good reason to award prestige to the company. Depending on how well a character fared in combat, you can award the company 1d6 or more Prestige.

Should the characters find the prospect of killing animals for sport distasteful, they will discover that they are not alone in the world. There are groups who seek out arena fights like the one run by the Cutters hoping to release the captive beasts and punish those responsible for their mistreatment. After the encounter in the Cutters’ warehouse, the characters could receive a message from an unknown individual asking them to join this noble cause.