September’s Legion of Mutates releases are monsters and units focused more on tactical playstyles. Numitor, for instance, is all about synergy and positioning whereas Shriekers and Hoppers offer fast-paced attacking and support that can take maximum advantage of Numitor’s specific skill set. 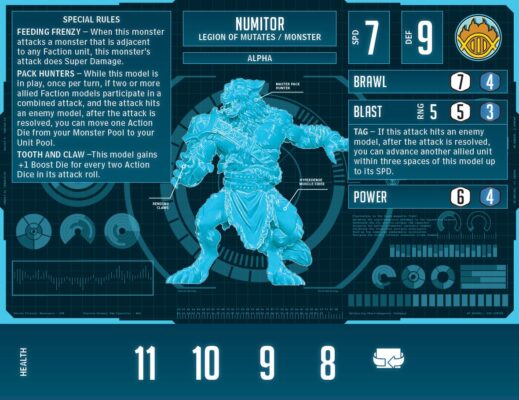 Numitor is the ultimate pack hunter, so it shouldn’t be surprising to see rules like Feeding Frenzy and Pack Hunters on this monster. This is the second time the rule Feeding Frenzy has been used, going all the way back with Terra Khan, but unlike Terra Khan (who has more of a focus on units), Numitor very much plays into Feeding Frenzy as his primary mechanic.

Tooth and Claw turns Numitor’s already exceptional Boost Dice stats into some of the most accurate stats in the game. Numitor really does have just an amazing stat block all around—SPD 7 and DEF 9, along with great attack stats, makes this monster exceptional at nearly everything he does. The obvious downside is he doesn’t have high mobility, which for a monster that requires pretty exact positioning can be quite debilitating. He had to pay something for his exemplary stats, right?

Finally, Tag brings together everything Numitor is supposed to be doing. The ability to move units—often quite far—on your monster turns is very powerful. The limitation is that Numitor can’t use Tag to set up a Feeding Frenzy attack…at least not in his alpha form. 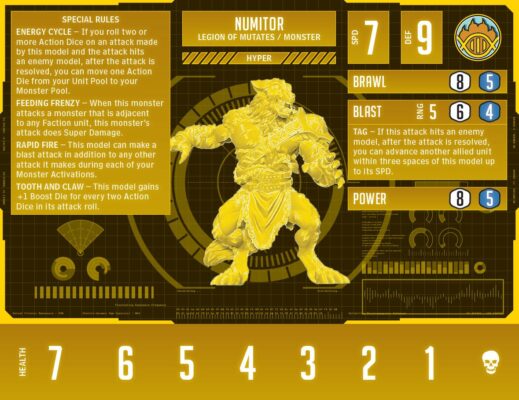 In hyper, Numitor pulls some of his focus on units and doubles down on leading his pack in for the kill. Energy Cycle replaces Pack Hunters, making Numitor more efficient instead of his units, which he will hopefully get to use quite a bit, given his 7 health in hyper form. He keeps Feeding Frenzy, Tooth and Claw, and Tag, maintaining his core elements.

The biggest change is Rapid Fire. Most of the time, Rapid Fire is a powerful ability that lets you clear screens or make an attempt at one last emergency damage. Numitor is all about setting up, however. Getting your Slasher or Shrieker to move lightning-fast and adjacent to Numitor’s next target will let him use Feeding Frenzy quite a bit.

Overall, Numitor should be paired with a high-mobility monster that can cover Numitor’s one significant weakness. He will also need a large part of his unit reserves to be made up of Legion of Mutates units in order to maximize the benefits they—and he—can gain. 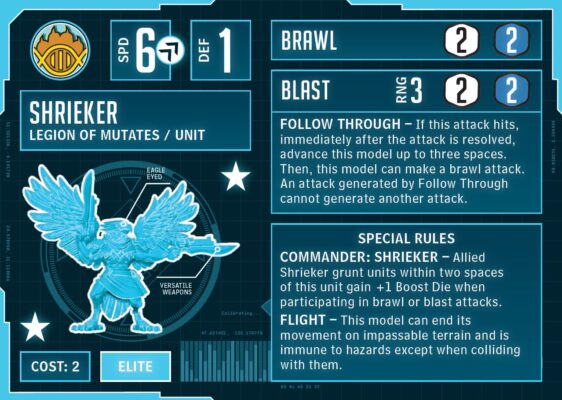 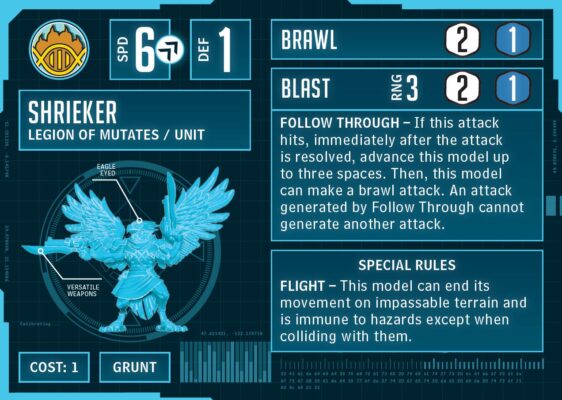 Shriekers play well to Numitor’s strengths. Between their base SPD as well as High Mobility and flight, they can get just about anywhere. Their defense, on the other hand, isn’t so hot, so though these models will be able to get out there, don’t expect them to stay out there too long.

Their real claim to fame is Follow Through on their blast. This grants them not only additional movement but another attack. If you can hit with the blast attack—something Cassander can help with—you will get to fly even farther into your opponent’s backlines and make that follow-up brawl attack. The name of the Shriekers’ game is to disrupt the back line. Combining them with Clickers to get Tag or with Command Apes for Blitz can make for some truly powerful turns. 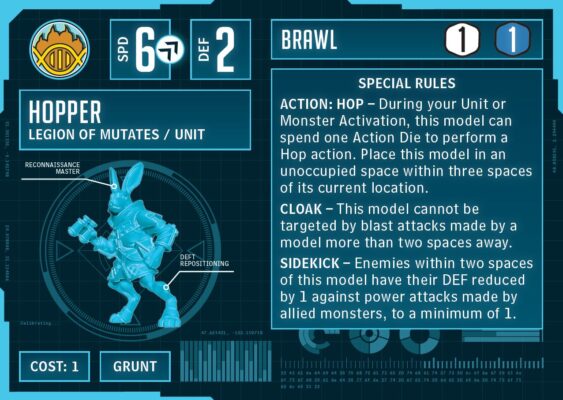 Hoppers play very similarly to Ape Infiltrators but with a very different focus. Sidekick, like Spotter or Flank for Blasts and Brawls, reduces the DEF of models targeted by power attacks. Positioning to get Sidekick is the real kicker, however; unlike Spotter or Flank, you won’t be able to use Sidekick in the same unit turn that they activate in.

That, of course, is where Action: Hop comes in. This action allows you to keep your Hoppers jumping around the battlefield constantly. Be it monster or unit turn, they can reposition to be certain that Sidekick is doing its work and so that Cloak can protect them better.

Overall, Hoppers don’t get a ton done on their own, but with fairly decent stats, they can get the solid punch in from time to time. Their power really lies in enabling the monsters leading the charge, and they are specifically helpful in enabling Numitor.

That’s it for Legion of Mutates for the foreseeable future. These releases should really round out some of the rough edges of the Faction. And I hope everyone has fun playing with these animal-human hybrids! Be sure to check back next week for the Masters of the 8th Dimension!