Another month means another wave of new Monsterpocalypse releases! Two new monsters and two new elite blisters are coming at the end of this month. So, today is monster day—and Slingoozer and Gakura are both monsters with a fixation on the debris littering the battlefield. 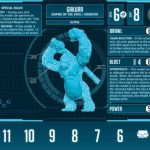 Gakura has the distinction of having the first action that doesn’t require a cost. Action: Outfit gives one unit Improvised Weapon for the turn. Some interesting design insights into this ability: with the exception of hazards remembering what monsters they’ve damaged, you might have noticed we rarely have rules that are not instant or continuous. Set duration abilities like Outfit will continue to be rare, but it also marks the largest we want an ability to need to be “remembered.” You won’t see abilities that have a duration longer than the turn in which they were used. Monsterpocalypse is nearly always a game without “memory” and intentionally so. It’s also worth mentioning that Action: Outfit will be affected by Static and the Action Die will be drawn from the Unit Pool. Actions that do not specify which pool to use always use the active turn’s pool.

All that said, Improvised Weapon on a single model can often be utterly devastating. The obvious choice within Empire of the Apes is the Rocket Ape; however, Outfit doesn’t require that the model be within the Faction, so Draken Berserkers, Slashers, Bashers, and other models that can attack multiple times or attack multiple targets will really shine. Of course Gakura, the master of improvised weapons, has the rule for himself as well. Coupled with his considerable base Boost Dice, he can be extremely accurate. While swinging around with an Improvised Weapon, he has Chain Reaction, which lets him sweep away any who are unfortunate enough to still stand in front of him.

Next, consider his strangest rule, Appropriate. Gakura doesn’t naturally have a blast attack; instead, the concept here is that he picks up pieces of debris and chucks them at his foes. In fact, while he is on or adjacent to a debris tile, he can effectively hurl the whole tile at his enemy. And the wording of Appropriate assures you will also get the Boost Die from Improvised Weapon for the tile he is tossing. Finally, if he uses a hazard as a weapon, he suffers damage for digging his hands into the burning wreckage, but the attack also causes super damage. If you are in need of a high accuracy shot, Appropriate will get the work done with very little investment. 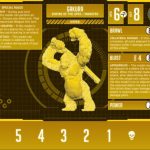 His hyper is straightforward but also extremely effective. Beyond picking up additional Boost Dice on his attacks, he also upgrades Chain Reaction to Collateral Damage. This new ability means that instead of having to sacrifice an attack to clear a nearby unit screening a monster, he can punch the monster with his innately impressive accurate attack. If you’re wondering, the damage from Collateral Damage occurs at the same time the monster hit by the attack is damaged. So, if there is any need to decide which models are damaged in what order, the active player decides.

Finally, Gakura picks up Lightning attack, allowing him to use his powerful blast or a power attack after clearing what he can with Collateral Damage. He holds onto Action: Outfit, Improvised Weapon, and Appropriate, making him seem fairly simple. That said, don’t underestimate this ape—everything he does might seem fairly minor, but in coordination, it all comes together well.

Now, let’s move on to the most agile of oozes. 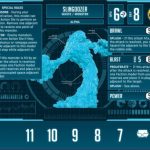 When we first announced Slingoozer, we made it clear this monster would be able to create waste units on the fly. And it certainly accomplishes that; between Gravid and Proliferate, Slingoozer will be placing quite a few additional waste units throughout the game. So, there are two important things to note about Proliferate: first, it only requires hitting a target, and second, it places the new unit on or adjacent to the target. This means you can do things like blow up buildings and then place a Toxxo in the rubble or next to the hazard; you can shoot monsters and create a unit at the target’s feet; or you can just destroy a unit and replace it with a waste unit. This is an extremely flexible ability that will effectively always net you a new unit.

Action: Absorb showcases how this monster can take wreckage and turn it into more ooze so it can recuperate; however, this action can only consume rubble tiles. Of course, Slingoozer has a plan to sidestep that restriction. Splash allows you to flip hazards when you attack something near them. Although the requirement on Splash states adjacent, it is important to remember that a unit on a hazard is also always adjacent to it (because the hazard is bigger than the unit). Further, both Proliferate and Splash trigger and resolve at the same time, so as the attacking player, you get to choose which order they resolve in. Thus, if you shoot a unit in a hazard, you can flip the hazard to the rubble side before placing the new unit from Proliferate. 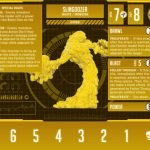 In hyper, Slingoozer forgoes playing with rubble tiles and focuses on more proliferation and defense. Between Constrictor consuming resources or making it difficult to get into position around Slingoozer and Amorphous reducing the effectiveness of power attacks, this waste monster can survive alongside the best of ’em.

Slingoozer does, however, have a price to pay for being able to casually drop Toxxos all over creation. It does not have any way to hit hard. Although it can take an extra attack with Follow Through, it cannot make a power attack after the blast. This means Slingoozer will have to count on the Toxxos it has been placing around the board in order to wrap a game up. You’ll have to choose carefully between setting up future monster turns or going all in and using the resources it has been building up to go for a win.

And there are your two new monsters for this month! Be sure to check out the two new alternate elite sculpt packs and these awesome new monsters at the end of the month. Until next month, I can’t wait for people to see the last of the Masters and Mutates models for a while. The Dervish, Hopper, and of course both the monsters will really be mixing the game up for Protectors and Destroyers alike!