I hope everyone is having a kaiju-filled spring! In today’s Insider, we’ll be sharing the Monsterpocalypse Crush Hour 2022 update and its one (and only) change and why we opted for that change. First, let’s talk about the sole update.

In 2021, we added an additional bit of text to the Crush Hour document requiring the first player remove two dice from their starting Unit pool dice totals. 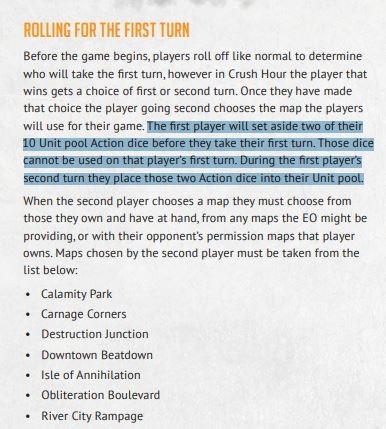 This was added due to some concerns regarding the first player’s advantage by being able to act first. Of course, this has a lot to do with the tempo of the game: the first player has the ability to set up a power base by securing buildings and power points while also having the first monster turn to undermine their opponent’s power base.

Because of this, a “dice tax” was instituted against the first player in the Crush Hour tournament packet.

However, after a year of data, testing, and community feedback, we’ve decided to remove this additional dice tax. Here’s why.

One of the best balancing factors for the first player alleged advantage is map selection. As the second player, you have the power to pick the map that best suits your list or perhaps undermines your opponent’s plans. The amount of player agency in this choice is exceptionally high, as it determines how the rest of the game will roll out. An experienced player will also be able to look at their opponent’s list, see the weaknesses it has, and use those against them during the map selection phase.

The next balancing factor to first player advantage comes during the building draft. After map selection, players take turns placing their buildings on that map, first the green foundations and then the yellow. If your opponent is going first, they are going to be incentivized to build a power base on their side of the board because the second player hasn’t placed anything on the board to interact with yet. As the second player, your mission is to be as disruptive to that plan as possible.

Once you’ve set yourself up on a favorable map and messed with your opponent’s ability to hold their power base, it’s time to attack! If you dampen the amount of power your opponent gets when they power up on their monster turn, you limit their monsters’ options. If you can cause your opponent to power up for 0 on their first monster turn while gaining at least 1 power in the process, you have managed to solve the second player puzzle!

With all of this in mind, we believe that the first player is actually at a disadvantage position when also being hit with the dice tax. Because of this, we believe it’s better for the health of the game to remove the tax.

I hope that this encourages you to go out and play in more Crush Hour events. Don’t forget to drop into the Monsterpocalypse Discord. We regularly watch players streaming games on TTS, and we have a running Crush Hour league, so anyone can join and play with us, regardless of their level of play!