TELL US ABOUT YOUR CHARACTER!

No, really, we mean it! We want to know all about your Iron Kingdoms RPG character. And more important, we want the whole world to know because they’ll be determining the final list of most-favorite characters for our Nightmare Empire character contest. One of them could be created by YOU. 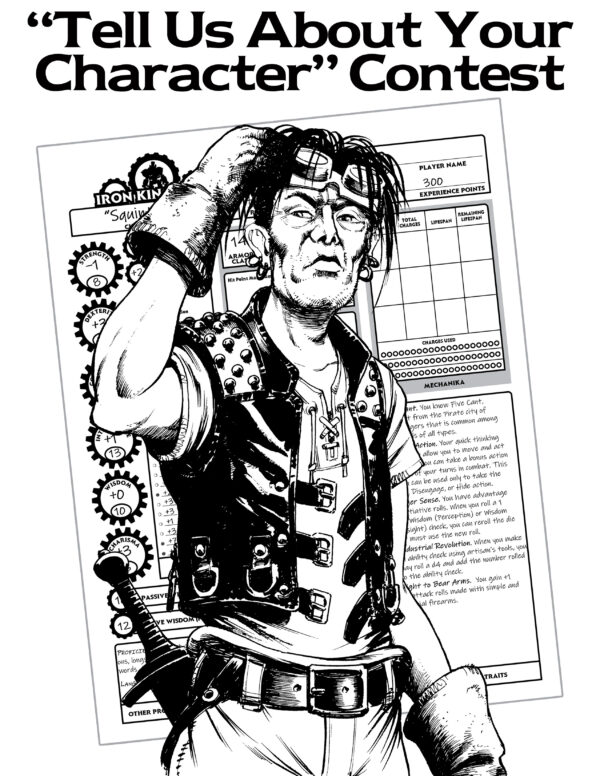 The creator of the winning entry will have their character illustrated by Iron Kingdoms creator Matt Wilson! Plus, RPG Development Manager Matt Goetz will write the character into a future supplement to be forever immortalized in the Iron Kingdoms setting.

Do you think your character can stand shoulder to shoulder with the likes of Alexia Ciannor, Professor Viktor Pendrake, or…Squint? Then we’re going to ask you to make three different posts of 400 characters or less (not counting URLs and hashtags) via Twitter or Facebook over the next three weeks that tell us everything everyone needs to know about our character. The five characters that accumulate the most likes over their three posts will move on to a final round, in which the public at large will be invited to determine which one will be illustrated and appear in a future supplement.

We’ll announce the winner approximately two weeks after the Nightmare Empire Kickstarter campaign closes, and the winner will receive a signed print of their character illustration and a copy of the first supplement their character appears in (digital and/or print) upon publication with the winner’s name included in the credits for their contribution!

Now, come on. Tell us about your character!

GETTING TO KNOW YOU (THE HOOK)

Who is this character? Sure, we want to know your race and class. But what about what they want? What drives them to quest throughout the Iron Kingdoms? What makes them special and unique? Why would we be lucky to have your character in our party? Or why would we want to have an ale with them? Tell us what is interesting about your character!

Each post should be set to “public” and accompanied by the Nightmare Empire Kickstarter campaign URL https://bit.ly/3x3SgCx and #NightmareEmpireIK so we can find it.  And be sure to get as many likes on your post as possible to make it into the final voting round!

Stay in the know on when Iron Kingdoms: The Nightmare Empire campaign goes live:

NO PURCHASE IS NECESSARY TO ENTER OR WIN. A PURCHASE DOES NOT INCREASE THE CHANCES OF WINNING.

The post IKRPG: Tell Us About Your Character Contest appeared first on Privateer Press.