Leading up to the release of five early iterations of some of the most powerful warlocks in Immoren, we’re showcasing each of the rule sets currently in playtest in this series of insiders. If you need to catch up you can find find Barnabas here, Makeda here, Madrak here, and Krueger here. Now it’s time to wrap up with the ever-resourceful Thagrosh. 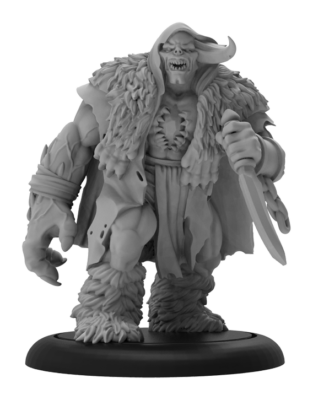 Before armies of blighted ogrun began to rally behind Thagrosh and his conquest of the Nyss, he was in search of power. He fused with Everblight’s athanc, becoming a combination of the two entities, but that didn’t mean he had fully mastered the mutating power of the crystal. This version of Thagrosh picks up at a time when he was still coming to grips with the powerful influence of a dragon’s soulstone.

The AOE remains in play for one round. While in the AOE, enemy non-warcaster models cannot spend focus points, be used to channel spells, or be forced.

Models gain concealment while in the spellcaster’s control range.

The big ability on his card is Rapid Mutation, which allows Thagrosh to change and adapt based on whatever the situation demands. Often your first turn with Thagrosh will be focused on casting Fog of War and spending 1 fury to gain Defiant Rage or Draconic Mastery. Defiant Rage gives Thagrosh some additional resilience—remember, a warlock is still considered “damaged” even if they transfer all the damage they take from an attack to one of their warbeasts. 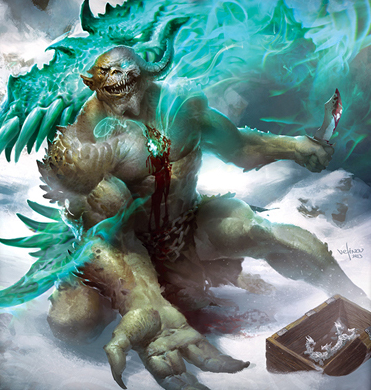 Pretty sure that doesn’t feel super-great…

Draconic Mastery, on the other hand, is all about increasing the efficiency of your warbeasts. The ability to cast an animus for free for the rest of the game is already a powerful ability, yet Draconic Mastery takes it a step further, allowing Thagrosh to utilize any friendly Faction warbeast’s animus, whether that model is in his battlegroup or not. Picking up Draconic Mastery first means Thagrosh will be playing a supporting roll for the first couple of turns.

During your second turn, depending whether you are playing Thagrosh defensively or offensively, you’ll pick up another rule, which might be Ethrunbal’s Guidance. This really makes Thagrosh and his warbeasts shine, giving them help hitting models. After the second turn, you will either have a powerful counterpunch piece ready to mix it up or a hard-to-remove support solo.

Athanc, as is not always the case for Thagrosh’s other incarnations, really does a ton of work for this model. It allows him to take a very small battlegroup—often either just a Mekanoshredder or a Raek, depending on how aggressively you’re playing him. Since he always has access to all 5 of his fury, he can always gear up with Rapid Mutation or start mixing it up once he’s needed.

Thagrosh will be playable in Primal Terrors as he is a blighted ogrun, but he will also be called out in Orcales of Annihilation. In Oracles, Beast Mistress solos will be replaced with Solos with Battlegroup Commander so as to allow both Thagrosh 0 and the Beast Mistress into the theme.

And that’s it—all five of the brand-new warlocks coming your way October 1st!