Leading up to the release of five early iterations of some of the most powerful warlocks in Immoren, we’re showcasing each of the rule sets currently in playtest in this series of Insiders. If you need to catch up, you can find Barnabas here. Now it is time to see what Makeda was up to before she became the heir to her house. 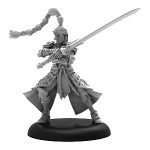 Before becoming Archdomina and claiming from her cowardly brother her place as the head of house Balaash, Makeda was trained to be the house’s backup heir. Despite being superior to her brother in every domain of worth, she was still merely an understudy. Yet during that time, she claimed many victories and proved herself on the field of battle.

Sacrificial Pawn [Warrior] – When this model is directly hit by an enemy ranged attack, you can have one friendly, non-incorporeal friendly Warrior model within 3˝ of it directly hit instead. That model is automatically hit and suffers all damage and effects.

Understudy – While a friendly Faction warlock is in this model’s command range, this model can use the warlock’s current MAT in place of its own.

The Teeth of Vaactash [1x]

The spellcaster immediately makes one basic attack with one of its melee weapons against each enemy model in its LOS that is in the weapon’s melee range. These attacks are simultaneous.

The Makeda of that past time was every bit the hero to her people, and any of them would willingly sacrifice themselves to protect her. Both Hero of the People and Sacrificial Pawn exemplify those facts. The two rules allow her to play aggressively while surrounded by other powerful skorne warriors. Her acumen and commanding presence create powerful synergies throughout the game.

Understudy, on the other hand, is to underscore her lot in life at the time. Despite her strength and mastery of magic, she was left without a title to inherit; however, before her brother’s betrayal, she was loyal to those who earned her respect. When in the presence of a worthy commander, she would fight that much harder just to prove her own worth.

Flashing Blade and the new spell Celerity round out her abilities. Flashing Blade shows off her extreme martial prowess in combination with her magic mastery, whereas Celerity shows how she can command aggressive and effective charges from her warriors. Additional movement and defense on skorne infantry can really push them to some pretty noteworthy heights.

Makeda can be fielded in the Disciples of Agony theme list, as she is a battlegroup commander. She will also be called out by name in the Masters of War theme list. In both theme lists, she is a welcome addition. Remember both her Sacrificial Pawn and Hero of the People abilities do not require affected models to be part of her Faction!

There are still more to come, so stay tuned, and be sure to recruit your very own Makeda of House Balaash when she’s released in September.