The town of Flottederoi has seen better days. Years before, when the Haleth Dynasty ruled, the harbour was used as the Royal Port and so trade flourished and the town grew. People came from miles to purchase and sell goods from different kingdoms. However, with the rise of the Ice Mages in the hills to the east the climate began to change. The harbour, which had always been open, began to freeze up on particularly cold days. Things got worse, and now the harbour and town are frozen most days. Crews of ice breakers venture out each day to break up the ice and allow ships to leave, but it refreezes again within hours. Now few captains dare risk the journey to Flottederoi, for fear they may never leave it. 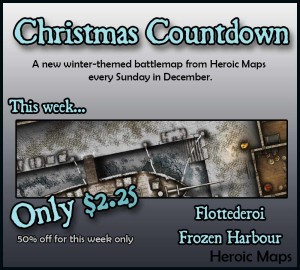 Need a quick map for an encounter?

A printable battlemap compatible with any RPG/Dungeon-Crawl game. Use as a standalone gameboard, or combine with any same-scale tileset.
Contents: A 20 x 30 map depiciting a frozen harbour. A wooden sailing ship is docked in the port, but the sea is frozen and icy. Snow covers the top of the ship. The winter landscape continues on the quayside, with snow-covered cobblestones and a frozen fountain. The harbour is surrounded by narrow buildings, housing shops, a tavern, a small chapel and people’s homes.
Also included is a 300dpi full size jpg, for poster printing or VTT. (n.b. gridless version only available as jpeg) 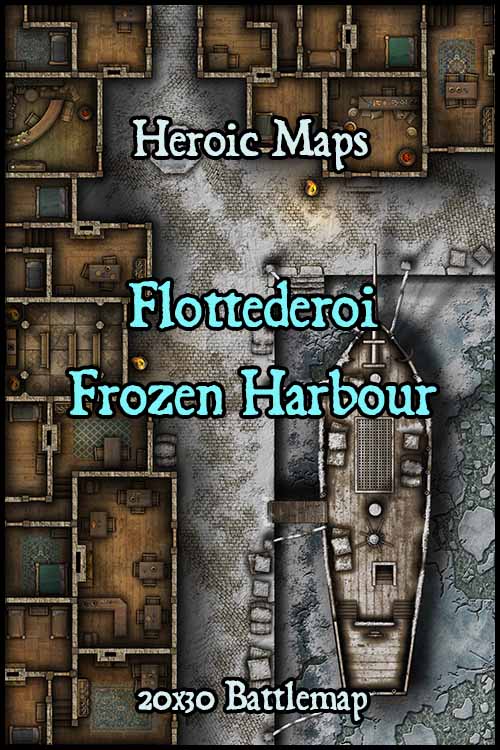