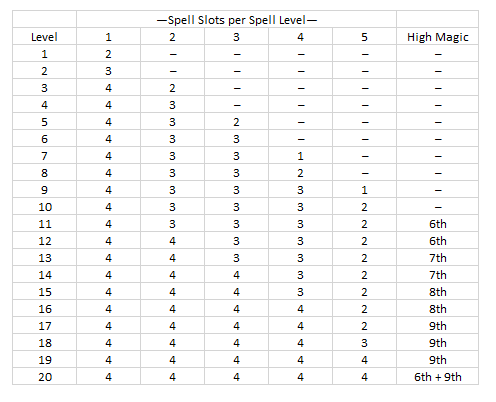 For spell slots, the rule book covers what spell slots are used by each professions and how they work for that specific class. We probably understand the basics of these spell slots, but it can always be tricky to master them and use the spell slots effectively during the game. This is often a problem players starting out with a class for the first time.

First and foremost; What is the spell slot level?

Spells and spell slots have levels, but these are not the same as character levels, as they go only to 9th level while characters can reach 20th level and beyond. Because they are both called levels, it can often be confusing for people making new characters or leveling them up. Should you have 3rd level spells at 3rd level? Sadly, no. Additionally, you can cast spells at different levels, their minimum level and potentially a higher-level.

For example: Your character has two level 1 spell slots and one level 2 spell slot. So, when you want to cast a 1st-level spell, you need to use one of your 1st-level spell slots, or a 2nd-level spell slot in order to cast this spell. Usually casting a spell at a higher level makes the spell more powerful, so always read the description carefully.

As mentioned before, characters also have levels, and according to their level, you will have a certain number of spell slots available. Of course, the more spell slots, the more spells you can cast before needing to short or long rest to recover your expended spell slots.

How do I know my spell slots?

This depends on the race of the character you create. Some classes have fixed spells and get new ones as they level up. They always have access to the entire pool of their class spells to work with when their turn comes, the druid is a great example of such a role.

Other classes need to learn their new spells, such as wizards. They have their own spell books and can choose from a large amount of spells when creating their character or when leveling up. However, they must pick a subset of these spells each day and cannot swap them out between rests, so it is important to think about what spells you bring on your adventure!

Sorcerers work very differently, and do not need a spell book to store their spells, they just know a bunch of them and can use any at will, however the total pool of spells that they can learn will be smaller than that of a wizard. When these classes prepare or cast spells, they use the list of spells they have learned or known, rather than all class spells.

So I play as a Warlock, how do my spell slots work?

As your class level increases, you can gain higher spell slots. To cast a spell, it must be powered by a spell slot of at least the same level as the spell.

There are many spells that become stronger after gaining a higher-level spell slot, which usually manifests as a higher damage output. For example, in the case of fireball, if you use a level 4 spell slot to cast it, it will add 1d6 points of damage to the original damage.

Of course, if there are some spells that are not marked to use high-level spell slots to cast them to gain additional damage, then using high-level spell slots will not empower them, so think wisely if the tradeoff is worth it. Of course if all the boss needs is one last fireball, then go ahead and cast it at higher level, but otherwise maybe pick a different spell.

Do any of you have good ways to keep track of spell slots?

There are currently several different tools and methods for spell slot tracking on the market. 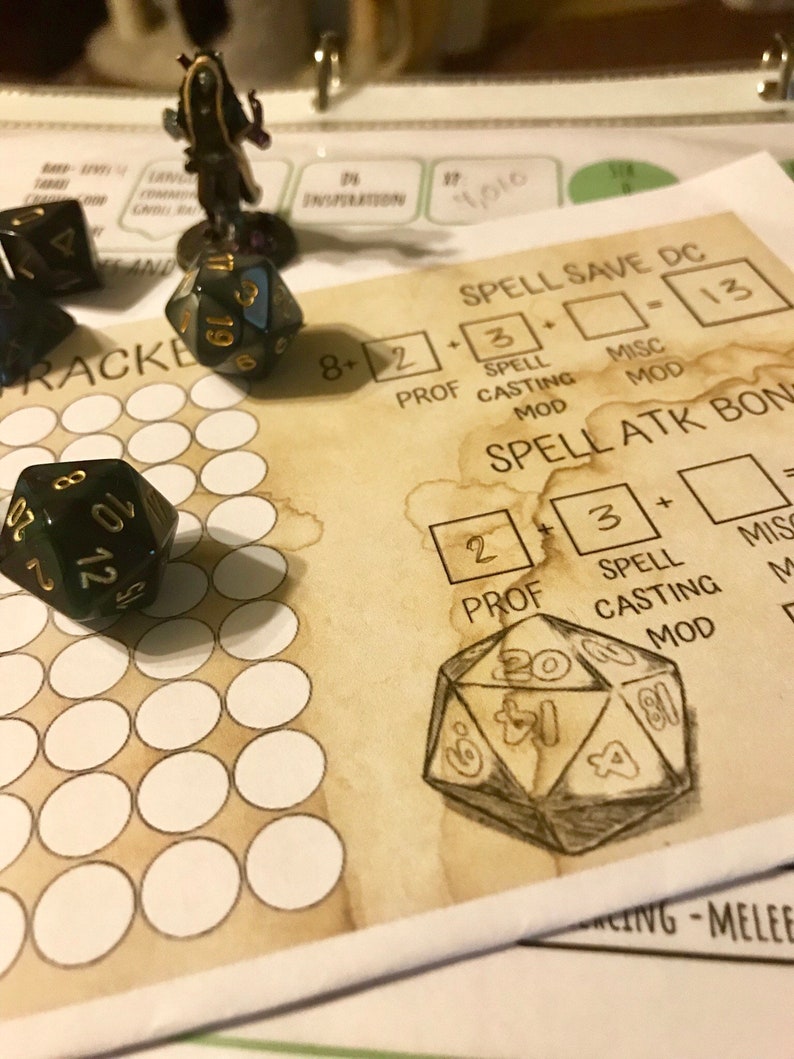 In the early days when we didn’t have many tools, we were used to using paper to make a simple spell slot tracker. Later, when we had character sheets and cards, we could buy them directly. Use non-permanent markers for writing on the character sheet unless the plan is to have the character killed off. The advantage is that it can be quickly obtained, but the disadvantage is that a new card is required every time. 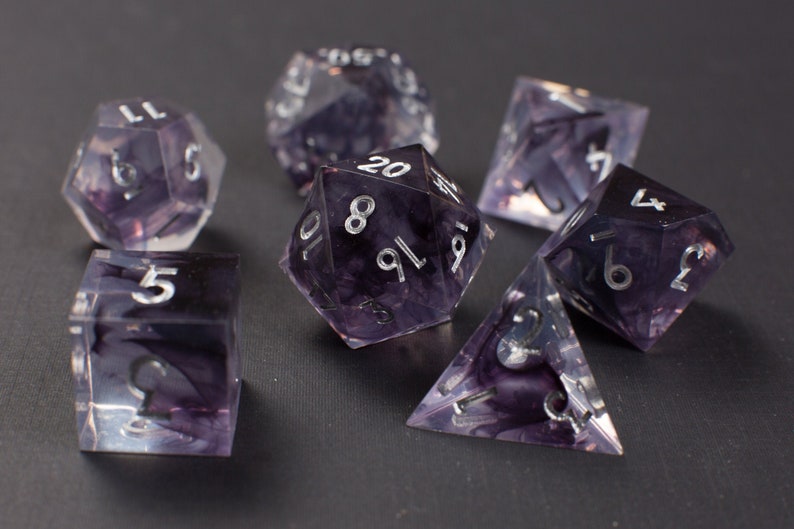 This method is great for dice hoarders. Now they can justify having more d6 or d4 than their character can possibly roll for. If the player is feeling a strong urge to flex, they can even use their limited edition metal d20s with luminous number indicators. A setup like this does have a downside of being easy to mess up if somebody “accidentally” bumps into the table.

However, if there are many players playing together, in order to mark the spell slots of all the characters, then a large amount of dice is needed to display, which will make the desktop messy.

This method offers more stability than using dice, but there is a degree of difficulty in quickly distinguishing how many pieces are stacked. Try to use coins that are thicker and made of sturdy material. Similar to the dice method, players can get creative with how they implement this kind of tracking. Ran out of coins? Use your rings, keys, or even pocket lint and group them together with a label.

This has the same problem as dice. In addition, coins or tokens are relatively flat, which is sometimes not good for grabbing or holding.

There are a ton of programs dedicated to documentation for all things Dungeons and Dragons. Fortunately, most of these programs are readily available on smart phone and tablet platforms. Apps like Fight Club 5th Edition for Android are all-in one character creation and progression tools. Using up and recovering spell slots in apps like this can be done in just a few screen taps.

Compared with the previous tools, such an app is relatively convenient, but it is also not intuitive enough, because you can only see the respective app value, and cannot be displayed in front of other players at any time; in addition, you also need to ensure your mobile phone is charged throughout the game. Of course there is also the problem that some DMs don’t want you on your phone all the time.

D&D 5E spell slots tracker Under $20 is a nice product!

We have always felt that a cheap products may not be able to achieve the results we want, but this thought is not always correct. The card’s spell slots tracker is extremely cheap, but its effect is quite intuitive and it is also portable. In addition, with the continuous development of games, there are also some spell tracker products that are affordable but have superior functions.

Are you a Cleric who is having a hard time tracking how many spell slots you’ve burned using cure wounds on the group’s Barbarian? Are you the Barbarian who can’t remember how many times you’ve gone into a rage? Or are you a Battle Master Fighter who needs a way to track the number of superiority dice you have at your disposal? Here’s the tool for you!

This dice spell tracker comes with 9 D6 dice and is intended to help you manage your spell slots while playing. Instead of marking on paper each time you consume spell slots, just roll down the D6 die and remove it when you have no slots left. A simple, visual tool to know how many spell slots you have left for your character. 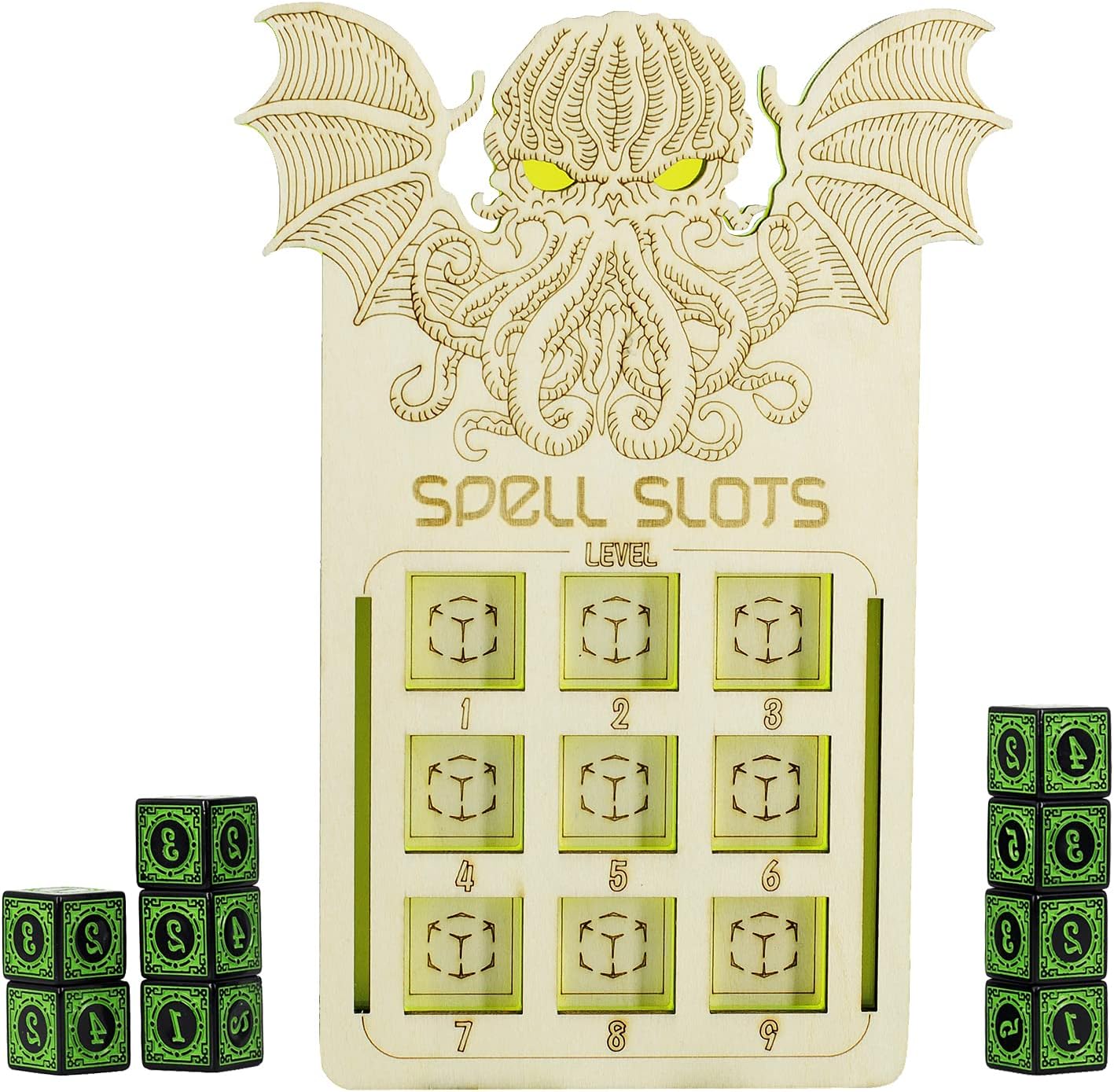 Keep track of the spells you cast without taking up much room (or arrows/bolts left). Slide the magnets up or down, as they slip right into place due to the magnets on the underside. All three sized trackers stick extremely well (sometimes too well) to magnetic whiteboards, refrigerators, some metal desks and lamps, cars, etc. and the smaller two trackers fit perfectly into dice tins that many dice sets are sold in.

One thing is that you need to always pay attention to the direction of the small magnet, otherwise they might fall off and get lost. Tempting as it may be, don’t fidget with them! 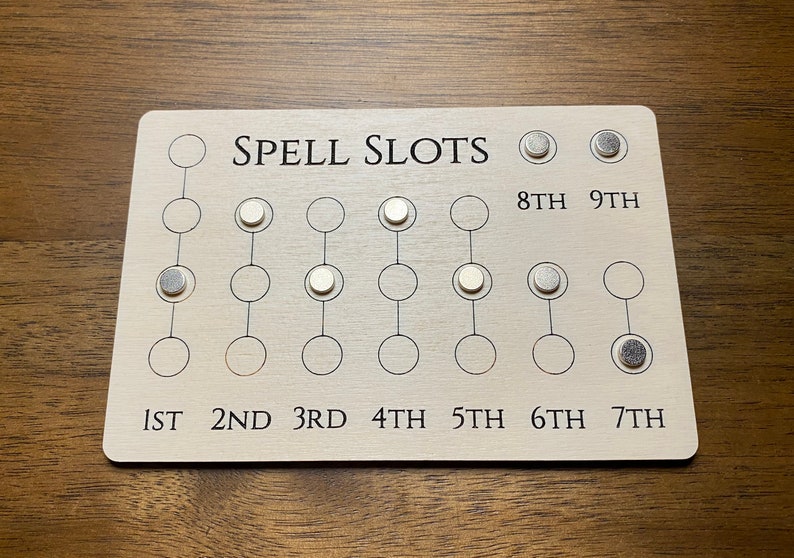 A simple, visual tool to know when you have used/available spell slots for your character. They are made to fit standard 16mm D6 dice, so you will finally have a way to use up all those unlucky dice that never get thrown anymore. Each Spell Tracker is 8cm by 10cm. They are made from double layered 3mm Birch Ply Wood.

A great and simple way to track your spell slots. 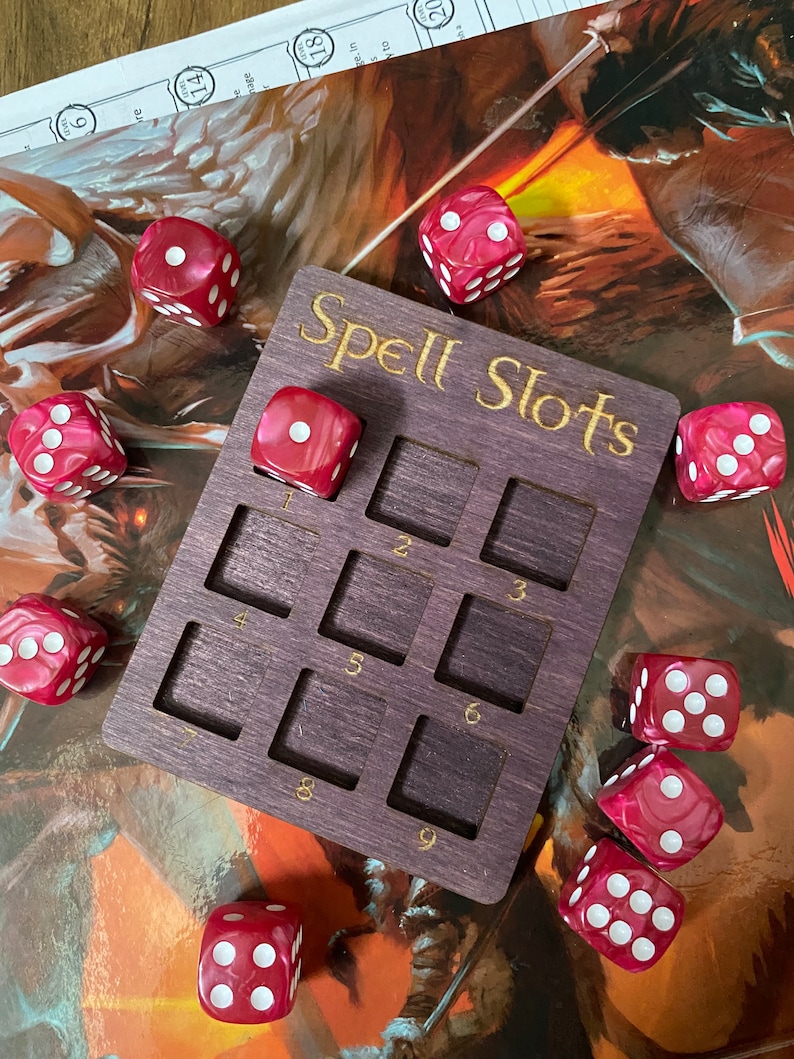 There are a lot of other ways to manage spells, but these are the ones I recommend for anyone having trouble remembering how many spell slots they have left.

Tools are nothing more than to promote the progress of the game and enrich the fun of the game. The choice of tools depends on how you play the game, only the ones that suit you are the best.