I have been waiting for this latest Warcaster: Neo-Mechanika Kickstarter for what seems like forever and finally it is arriving.

Why the big wait this time? You always say this!

Well not always, but this time was some extra-cool excitement because I was back working on Aeternus Continuum and the concepts for the Talons Squad and a centerpiece type of model in the Divine Tempest Champion Solo. I was in love, but anyone that knows me would not be surprised that I wanted to work on these models.

The Talons Squad reminded me of the Witch Coven from WARMACHINE, a caster unit that I liked as a player and always wanted to resculpt or sculpt an epic version of. They had that classic fantasy feel and reminded me of the many great fantasy artists who inspired me. Well, I had to wait for the future—literally—so while I still got that vibe, they just happened to be part-flesh, part-machine (maybe; metal possibly? Does anyone really know what the secrets of the Aeternus Continuum are?). But still a trio of badass women.

The attendants and their leader share a variety of similarities but each with a few subtle differences. One may have flesh where the next has cables and with what appear to be metal parts, gears, sockets, and such! 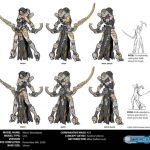 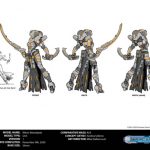 The goal with this unit was to have them look sleek and deadly, and I feel like the concept art captured this. I tried to follow that exact style by Andrea Uderzo in my sculpts. While I do like all three of them, I really like how the trooper with the dagger held high turned out… well, I kinda like the other trooper too… Really, though, I am very happy with how these turned out, and I’m excited to get my hands on them and to see how Cadres work.

The second part of the concepts I fell in love with was for the Divine Tempest Champion Solo. I know that I want her on my gaming table, wrecking my opponents. 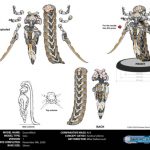 Not every sculpt is an easy one to work on, and the Divine Tempest was one of those I knew was a centerpiece model; I was going to have to nail this one.

Sometimes you look at a model for too long, and you simply lose sight of what you were trying to do. I had done just that.

Of course, I wasn’t giving up; I knew this could be a great piece, and I wanted to be attached to it, so I went back to work and started fixing the problem areas. And I did… with a fair amount of constructive feedback from Ron.

Why was it so challenging? Well, there is a lot going on; she needed to have certain shapes and lines and cuts, all going in all the right ways to provide the silhouette we wanted. Plus, she had this crazy techno-looking train hanging off the back of her helm that needed to look equally spectacular.

In the end, I think we did, indeed, nail it—she has the look and feel the team was after, and I am excited to see the final painted version! Hopefully the Aeternus Continuum Cadre (aka the coolest one) has caught your eye as well, so remember…immortality can be yours if you just play the right Faction and get in on the Kickstarter while you can!

The post Warcaster: The Thousand Worlds – Which Witch is Which? appeared first on Privateer Press.