“As voracious as a dire troll, as ill-tempered as a gorax, and as fecund as a hare, all wrapped up in a package not much larger than a common housecat. I present the burrow-mawg, an invasive species that seems to have thrived in the world after the Claiming …”

Renowned expert in all matters of unusual beasts, there are few individuals who have seen as much of Immoren as Professor Viktor Pendrake—the High Chancellor of Corvis University’s Department of Extraordinary Zoology—and fewer still who survived the experience and chronicled the tale. His foundational work, the Monsternomicon, gives a detailed account of the many unusual encounters he has faced in his journeys across the Iron Kingdoms and beyond. To get the most out of these encounters, you will need a copy of Iron Kingdoms: Requiem and the Monsternomicon.

The ravages of the Claiming left behind empty skeletons of villages scattered across the Iron Kingdoms. Their populace, killed by the infernals in their hunger for souls, were left dead on the ground to rot; it was not flesh and blood the infernals sought. With an abundance of easy scavenging and dens ready for their habitation, creatures of the wilderness began to take over these forgotten towns.

The specific location of the encounter is not important: from the hilly grasslands of Cygnar’s Midlunds to the ice-choked tundra of Khador, every human civilization in the Iron Kingdoms has many such abandoned places. The characters might encounter the abandoned village during their normal travels or have been sent to check up on the inhabitants to see if anyone survived the Claiming.

This encounter is suitable for a party of four 1st-level characters.

The encounter begins when the characters approach the abandoned town. Read or paraphrase the following:

The afternoon sun blazes down as you approach the remnants of what used to be a town. The weather-bleached bones of its former inhabitants litter the dry avenue that runs through the town’s center. On either side of the street, wooden structures stand with open doors and shattered windows.

The village is in a state of extreme disrepair. Most of the buildings have sagging roofs, broken windows, and the bleached skeletons of dozens of humanoids and animals lay in the dusty streets where they fell.

Skeletons. A character who studies the skeletons can make a DC 8 Intelligence (Investigation) check. If the check succeeds, the character determines the bodies died several years ago, but there are gnaw marks on the bones.

The abandoned town is a simple encounter to run. You can let the characters explore any of the structures at their own pace. Once they encounter one or more of the burrow-mawg packs in the town, feel free to harass them with the occasional solitary burrow-mawg or, if you really want to put pressure on them, unleash a group that emerges from one of the tunnels the mawgs have dug in the street to form into a swarm.

Once they become aware of the characters, the hungry burrow-mawgs will try to cut off the characters’ escape and overwhelm them. The creatures are dimwitted and driven by hunger (as well as an overactive adrenal gland), so they fight until they are destroyed. 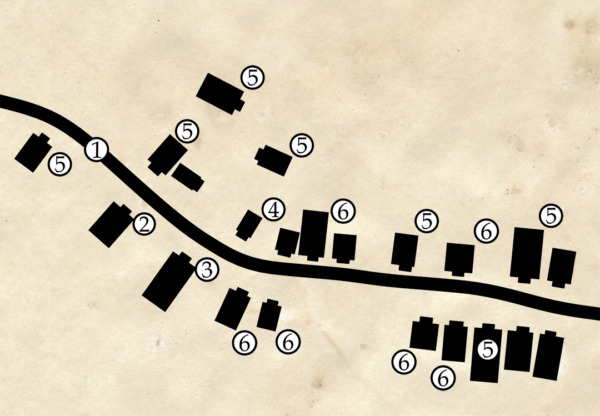 The following locations are keyed to the map of the abandoned town.

The main thoroughfare of the town still shows signs of the chaos from the Claiming’s final days. The people who lived here died en masse in a panic as their souls were torn from their dying bodies.

The street is a dry, dusty path wide enough to fit two wagons. Years of abandonment have left the dirt track in poor condition. There are dozens of skeletons on the street.

Mawg Tunnels. There are numerous tunnels burrowed into the street. Each is about a foot in diameter and leads to a complex network of passages that run under the street and into several of the buildings. If the characters disturb the burrow-mawgs, then the creatures use the tunnels to reach other areas and surround the characters.

What used to be the town’s pub is now a cobweb-covered den of overturned chairs, mold, and shadows.

Aside from some kegs of ale that has gone bad, there is nothing of note in the town’s former drinking establishment.

As you approach what seems to have been the general store of the town, the scrabbling of claws and agitated growls sound from deep within.

The provisioner is the primary den of burrow-mawgs in the town. The creatures discovered the storeroom and consumed everything edible within it. Once the supplies were gone, the pack started to branch out to nearby areas to hunt for prey.

Storeroom. The storeroom of the provisioner has a deep tunnel bored through the wooden floor that leads to the main den. An alpha burrow-mawg watches over the pack’s young here and fights ferociously to protect them.

Treasure. In the storeroom, the only item the mawgs have left untouched is a case of high-proof vyatka imported from Khador, with labels touting they are 190 proof. The bottles are worth 10 gp each to the right buyer, as the distillery was destroyed during the Claiming, but can also be made into improvised incendiary devices by adding a wick into the neck of the bottles. Used as a weapon, the bottles are an improvised weapon that can be thrown with a range of 20/40, have AOE (5), and cause 2d6 fire damage.

Rotting straw and pale bones litter the floor of this dank and dusty place. A sour stink of urine and droppings is thick in the air.

The stable contains a smaller secondary nest of burrow-mawgs, linked to the primary nest across the street by a tunnel. A swarm of burrow-mawgs slumbers here but will investigate any disturbance in the provisioner.

There are several small homes across the town. Each contains an assortment of common goods, worth a total of 2d10 gp.

When the characters explore one of the homes, there are 1d4−1 burrow-mawgs present.

Many of the town’s buildings have collapsed due to years of neglect. The rubble of the collapsed buildings is difficult terrain.

Aggressive. As a bonus action, the swarm can move up to its speed toward a hostile creature that it can see.

Sunlight Sensitivity. While in sunlight, the swarm has disadvantage on attack rolls, as well as on Wisdom (Perception)checks that rely on sight.

Multiattack. The swarm makes three attacks, one with its bites and two with its claws.

Aggressive. As a bonus action, the alpha can move up to its speed toward a hostile creature that it can see.

Sunlight Sensitivity. While in sunlight, the alpha has disadvantage on attack rolls, as well as on Wisdom (Perception)checks that rely on sight.

Multiattack. The burrow-mawg makes three attacks, one with its bite and two with its claws.

Campaigns are made or broken on the challenges and NPCs used to flesh out the world, so we figured we’d preview an example of some of those that are doing everything they can to keep evils of the Scharde Islands and other threats from disturbing the coastlines of the other Iron Kingdoms – Iron Kingdoms RPG The Nightmare Empire comes to Kickstarter this summer!