Few things are exactly as they seem, and our first assumptions about them rarely get to the deeper root of the matter. We, of course, can approach situations only with what perspectives and experiences we possess. However, one will find that a bit of patience and closer examination can reveal the perils we encounter in the field of extraordinary zoology hiding most unexpected root causes. For instance, allow me to tell you a story about a most unusually named bog trog…

Renowned expert in all matters of unusual beasts, there are few individuals who have seen as much of Immoren as Professor Viktor Pendrake—the High Chancellor of Corvis University’s Department of Extraordinary Zoology—and fewer still who have survived the experience and chronicled the tale. His foundational work, the Monsternomicon, gives a detailed account of the many unusual encounters he has faced in his journeys across the Iron Kingdoms and beyond. To get the most out of these encounters, you will need a copy of Iron Kingdoms: Requiem and the Monsternomicon.

Blubb is a bog trog with a plan.

This mist speaker’s tribe has suffered under the oppressive yoke of the Spadetail gatormen for generations. Forced to act as cannon fodder for the Spadetail, the bog trogs have seen their numbers decimated in battle after pointless battle against trollkin, human settlements, and the redouts of the Circle Orboros in the deep Thornwood Forest.

Blubb knows his tribe cannot endure another major assault. Rather than sit idly by and watch the last of his people fall to the ambitions of the Spadetail, he has concocted a plan: let someone else handle it.

To that end, Blubb has struck out to the south and east, staging rapid strikes against Cygnaran and Ordic settlements. His attacks aren’t meant to gain anything—instead, he’s looking to kick the hornets’ nest and force the human kingdoms to respond to the aggression. Supporting him are a small group of loyal bog trogs who are willing to sacrifice their own lives if it means their families can live free of gatorman cruelty.

After several of these unprovoked attacks, Blubb’s raiders have left a string of broken villages and wounded victims across the southern and eastern fringes of the Thornwood Forest. Local communities have pleaded with their leaders for assistance against the attacks. Because the targets lie so far from major settlements, the kingdoms of humanity have been slow to respond to this call for aid—leaving adventurers like the player characters as the most likely to intervene.

This encounter is suited for a party of four 3rd-level characters. 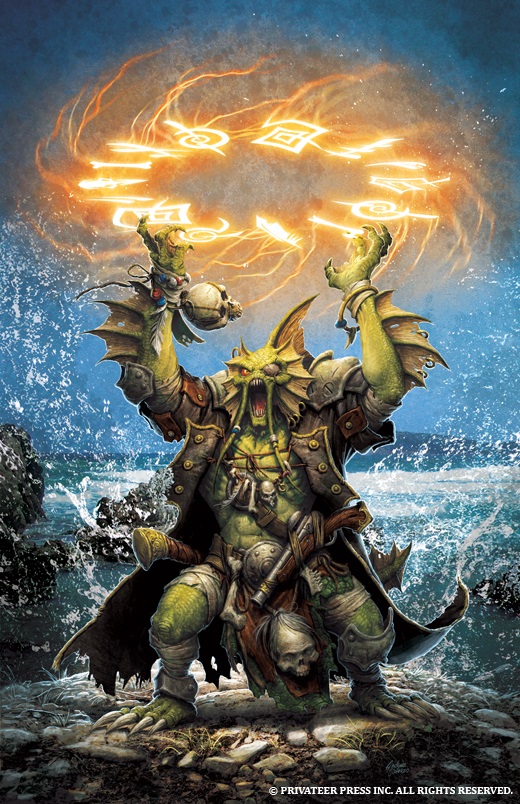 The encounter begins when the characters set out into the wilderness to find the bog trog attackers. This won’t present too much of a challenge: Blubb and his fighters want to be found, but they are looking for a group they believe are capable of dealing with their gatorman oppressors.

Read or paraphrase the following:

The trail of the bog trogs who have been attacking random villages in the Thornwood Forest leads into a boggy valley, littered with thick patches of cattails and moss-covered fallen logs. The dense forest above blocks out all but a few pinpricks of light. From somewhere in the reeds, the trill of a creature and faint plop is the only sound.

Five bog trogs and one bog trog trawler hide in the shallow water and among the reeds, watching the characters’ approach. Their job is to evaluate the strength of the characters by ambushing them in the forest.

Environment. The dense forest canopy blocks most light, and the valley is dimly lit. A few fireflies buzz in the air, moving to avoid other creatures where possible. A character can make a DC 10 Intelligence (Nature) check to notice areas the fireflies flit away from, locations where undiscovered bog trogs might be hiding.

The boggy floor of the valley is covered with a layer of cold, muddy water. It is about a foot deep in most areas, with a few deeper patches scattered around the valley, just enough to conceal the bodies of the waiting bog trogs.

The ambush commences when the trawler rises from a thick patch of cattails and fires its harpoon at the lead character, attempting to reel its target in. The remaining bog trogs maintain their concealment until the characters engage in combat, and they then move to outflank their targets.

Ending Combat. When over half of the bog trogs are incapacitated, the healthiest survivor begins to sprint away, using the Disengage action (if needed). While it runs away to where the mist speaker Blubb waits, the remaining bog trogs launch an all-out attack on the characters.

The fleeing bog trog cries out to Blubb and makes no effort to conceal its trail as it runs. Characters with a passive Wisdom (Perception) of 12 or more can hear the mist speaker calling back to its companions, giving away its location deeper in the forest. 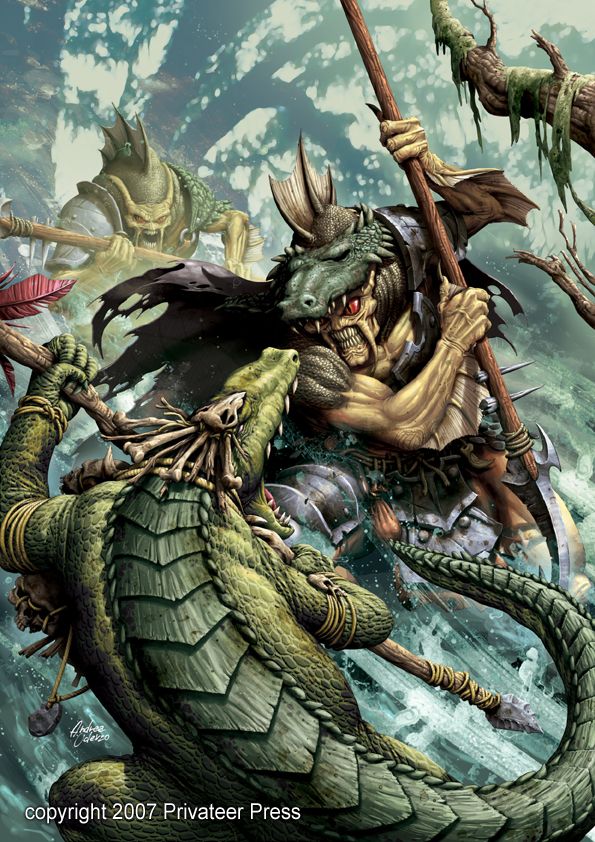 If the characters pursue the fleeing bog trog, the trail leads them to Blubb.

The mist speaker waits not far from the ambush site, perched atop the branches of a moss-draped tree with his companions, a pair of bog constrictor snakes named Ashi and Gara. His perch is 20 feet above the forest floor.

In preparation for the characters’ arrival, the mist speaker makes use of one of his prized possessions: a bone grinder talisman known as a speaker’s tongue. The mist speaker has several of these items fashioned from the tongues of humans from Ord and Cygnar. By consuming one, he gains the ability to speak the language of its former owner for 1d4+2 hours.

Blubb makes no effort to conceal himself. From his perch, he studies the characters with an appraising eye as his constrictors wind around his arms.

Any character who examines the mist speaker and succeeds on a DC 12 Wisdom (Perception) check notices thick scars on his chest and arms—marks left by the Spadetail gatormen who have enslaved his people.

When the characters arrive, Blubb speaks, using the voice granted by his talisman.

“You have come to avenge your fallen? Know that the great Spadetail gatormen ordered their deaths! And they will not stop until their bellies are bloated with the meat of the dead.”

A character can make a DC 12 Wisdom (Insight) check to determine that Blubb is withholding something. The gatormen had no hand in the attacks, and the bog trog is simply trying to direct the characters’ hostility against his people’s persecutors.

If the characters attack, Blubb responds in kind. He reasons that anyone he can defeat wouldn’t stand a chance against the gatormen, and if he manages to injure or kill a few of their companions, the survivors will be even more motivated to take out their aggression against the Spadetails.

Blubb remains in his tree, relying on his spells in combat, but sends his pet constrictors down to fight on his behalf. During the combat, he makes frequent references to the Spadetail gatormen, shouting that he acts as they have commanded him. He goes so far as to work in references to where the characters can find the “masterminds” of his attack, shouting things like: “Their invincible army will march from the shores of Lake Draywater where they make their home!”

If the characters noticed Blubb lying earlier, they may try to parlay with him instead. A successful DC 14 Charisma (Persuasion) check convinces Blubb not to fight, but the mist speaker seems to deflate in disappointment.

If the characters succeed on the check, use the following to guide a conversation with the mist speaker:

The end of the encounter depends greatly on how the characters resolved their meeting with the mist speaker.

If Blubb was defeated in combat, his final words are once again an effort to direct the characters’ aggression at the Spadetail tribe. Before perishing, the bog trog looks toward the water and says, “Ashiga, great spirit. I hope I did it right.” From there, the characters might be curious about the gatormen of Lake Draywater and choose to investigate on their own or otherwise return back to civilization for their prize.

If the characters managed to parlay with Blubb, however, they have a number of ways forward. They might want to assist the bog trogs in pulling up roots and finding a new home far from the Spadetails—but the gatormen won’t be happy to see their minions leaving and may launch a pursuit to get them back. The characters might also try to strike against the Spadetails with the surviving bog trogs fighting by their side.

No matter what course of action the characters take, conflict within the Thornwood will continue, occasionally spilling over into the lands of the Iron Kingdoms.

The post The Pendrake Encounters: Bogged Down on the Bayou appeared first on Privateer Press.