The T-62 tank underwent a number of upgrades in its long service life. It’s modernisation program started in 1972 with the mounting of a 12.7mm DShK machine-gun on the loader’s hatch for anti-helicopter fire. It was fitted with a laser rangefinder in 1975. Like their tank forces, Iraqi mechanised infantry doctrine followed the organisation, methods, and tactics of the Soviet motor rifle units. Soviet advisers in the 1970s had drilled and educated the officer corps on Soviet combined arms tactics. An Iraqi mechanized company is a true combined arms force with infantry, machinegun, anti-tank, and anti-air capability. As well as the BMPs, the infantry were equipped with AK-47 assault rifles and RPG-7 anti-tank rockets, making them mobile and dangerous. Iraqi mechanised infantry are also mounted in a number of other vehicles other than the BMP-1. These come from a variety of sources. Iraq purchased vehicles from whoever were willing to supply them. These motorised infantry battalions’ war-fighting remained firmly rooted in Soviet doctrine. Much of their infantry equipment and weapons remained Soviet types, with the occasional exception. 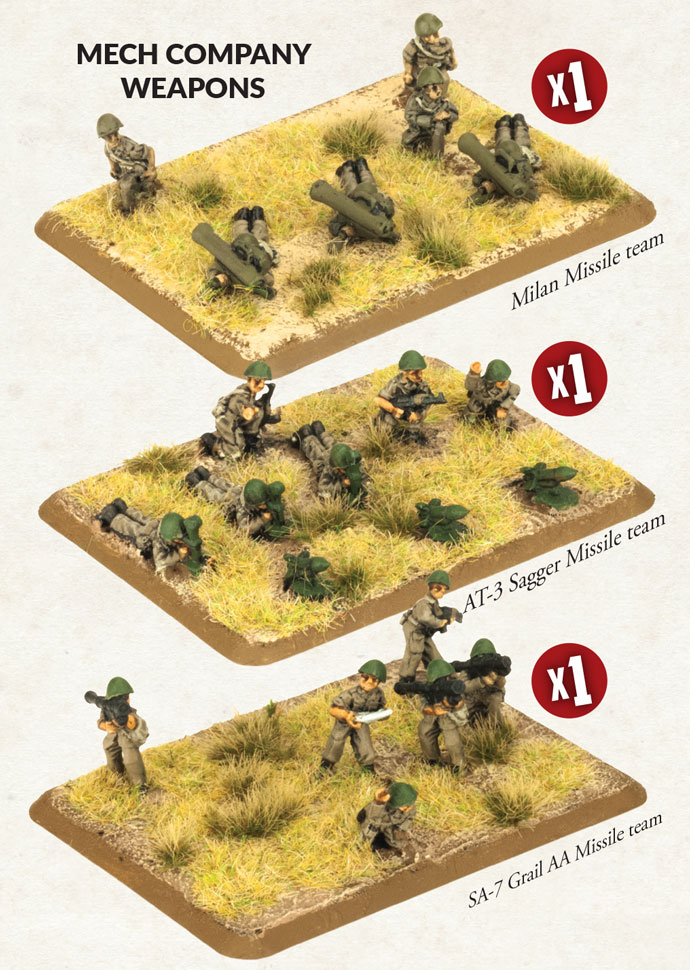 The Iraqis have spent many years working with Soviet equipment and manuals, learning the Soviet Army’s tactics and taking on many of their fighting methods. They had also fostered good trading relations with the West. France in particular had been willing to trade weapons and provide training to the Iraqi Army. Though the Iraqis did use the Soviet AT-3 Sagger suitcase man-portable anti-tank guided missile, the French also sold them the more effective Milan anti-tank guided missile systems. Anti-aircraft defence was provided by a SA-7 Grail SAM section.

Check out the full spotlights on the Team Yankee Website…