I hope everyone is having a monsterful—er, wonderful—day. I’m excited to write this Insider because we’re finally circling back to the Vegetyrants and the Necroscourge, and I want to take this opportunity to catch everyone up on where we stand with the Vegetyrants and Necroscourge story arc and what models are going to be joining their forces soon.

When our world was still in its primordial state, the Vegetyrants were one of the first lifeforms to exist here, part of the planet’s natural evolution as it began to become hospitable to new life. But that spark of growth drew the Necroscourge like a beacon, and the faction sent a massive invasion swarm across vast space to dominate and control that new life.

The Vegetyrants attempted to repel the invading swarm and were nearly wiped to extinction in the process. In a last desperate attempt to save the planet, Flourina drew on the power of all life in the world in order to turn the planet itself into a living weapon, one radiating light so intense it scoured the Necroscourge invasion force. Exhausted, the Vegetyrants were forced to hibernate to preserve their lives and to ready themselves for any future Necroscourge attack.

For its part, the Source of the Necroscourge was wounded by Flourina’s attacks, forcing the force’s retreat. By draining life energy feedback via wormholes and nexus points, the Necroscourge were able to survive the encounter with the Vegetyrants long enough to bore their way across the galaxy, crossing the cosmos in search of more vulnerable prey.

After the war between the Drakken and the Planet Eaters, Necroscourge scouts discovered the carcass of Eltanin, a fallen hero of the Drakken Armada, floating in space in the aftermath of a bloody battle with the Planet Eaters. The Necroscourge repurposed Eltanin’s body into a horrific weapon of conquest, and in doing so, granted the Source access to one of the greatest tactical minds in the galaxy. Renamed Galamaxus, the zombified Eltanin sought out the Drakken Armada that he had once been a part of, landing on Earth mere months after the Drakken arrived. Galamaxus’ arrival activated the dormant nanites left on the planet in the aftermath of that first war, and these helped him conquer and zombify Crustaceor, turning the Triton into the zombie lobster kaiju, Karkinos.

By killing one of the natural protectors of the ecosystem, Galamaxus inadvertently awakened the Vegetyrants, and the first to rise was Stomatavorus Rex, who immediately set out to find and kill the Scourge. (You can find that story here in my first Vegetyrant article https://home.privateerpress.com/2021/10/18/monsterpocalypse-monday-the-verdant-and-the-vile/)

The battle between Stomatavorus Rex and Karkinos ended in a stalemate, sending the Vegetyrant in search of reinforcements. Thus was Flourina awakened by Stomatavorus in an attempt to balance the scales. Yet things had changed since last she went to battle—half of the Vegetryants’ force remained in hibernation on a world considerably more populated than before, making it almost impossible for her to scour the Swarm as she’d done the last time. To make matter worse, Galamaxus evolved during the apex event, becoming Nightmare Galamaxus, and began to pump out nanites at an alarming rate.

And that brings us to where we are in the story now.

The growing swarm of nanites is boring holes across the fabric of space-time and opening the Necroscourge Nexus back to the Source. Flourina, realizing that these rips in reality must be closed, joins with Stomatavorus Rex to revive the last World Tree on the planet. At one time, these noble trees—as tall as skyscrapers—covered the planet as part of Flourina’s planetary defense system. Now only the one remains. But with its revival, the Vegetyrants can use it to close the Necroscourge Nexus, for the World Tree acts as an anchor in space-time to staunch the bleeding of life energy back to the Source. Still, this is a temporary solution; it’s only a matter of time before the Source sends a new weapon into the fight.

But Flourina still has one more trick up her sleeve.

That should catch you up on the state of the world of Monsterpocalypse; now let’s get into the cards and talk about what these models can do. 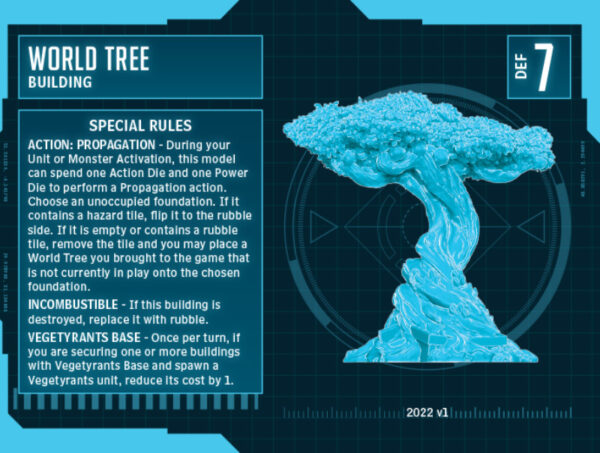 The World Tree was a challenging building to get right. One of the core themes of the Vegetyrants is their ability to change the landscape into a lush green paradise. From the beginning, we knew the World Tree was going to be a building with the ability to regrow around the map. So, getting the wording correct for how to do that was easy—but balancing it was a bit harder.

In Monsterpocalypse, buildings are one of your key sources of damage; in fact, there are games in which you end up with a mostly flattened landscape as most of the buildings leave the map. The World Tree helps bring a damage source back to the table, sometimes when your opponent least expects it. For this same reason, our tree needed to be incombustible.

So, just why doesn’t the World Tree catch fire? Well, story-wise, I attribute it to being difficult to burn fresh, green, living wood. Game-wise, the building would be too powerful if it left a hazard tile, as it would increase the amount of damage a monster would take for being power-attacked into it.

The World Tree has some other interesting features as well. Its action Propagation can be used to flip a hazard tile to its rubble side—this can be used to dampen damage your opponent has your monster lined up with, and it can help a pedestrian get around without taking fire damage while also helping set up repair lines. With the right tools, you can keep your city standing and full of greenery. Lastly, the World Tree, like other Faction bases, can reduce the cost of a Vegetyrant unit by 1 during your spawn phase. Vegetyrants love such a discount, as it helps them better cover the board with lush jungle. 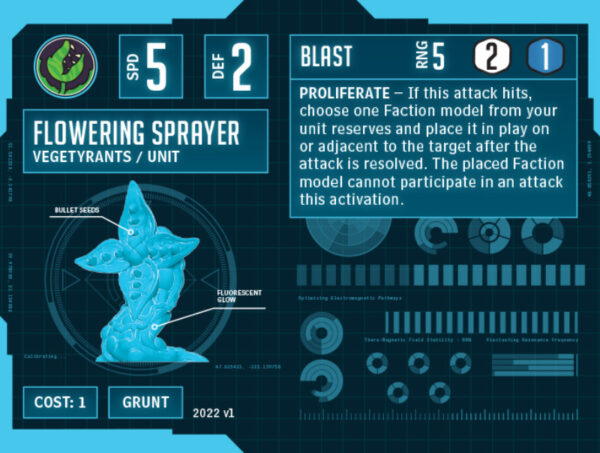 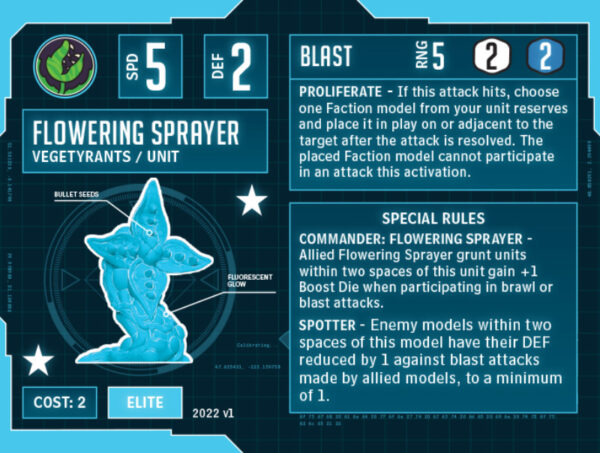 The flowering children of Flourina, these adorable sunflowers spit seeds the size of mortar rounds at their opponents. The seeds then take purchase and sprout into a new Vegetyrant unit. The elite Flowering Sprayer has Spotter, which helps set up other Flowering Sprayers as well as provides Flourina a tool to help her with her proliferating Solar Cannon. 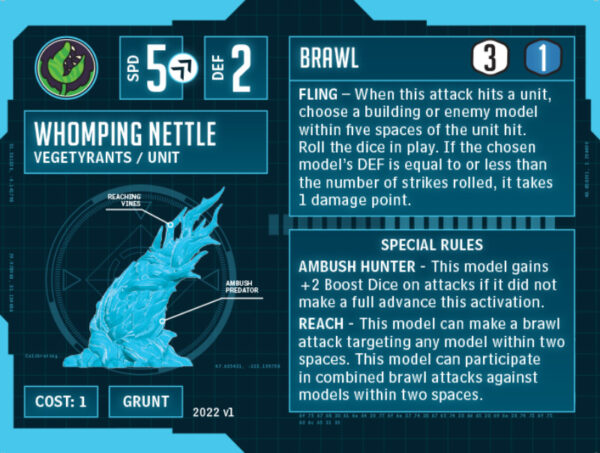 This angry mass of vines and thorns is an Ambush Hunter. It lies in wait and smashes down on its unsuspecting prey, flinging them into enemies farther away. With its vines, it can Reach enemies two spaces away. Ambush Hunter grants the Whomping Nettle +2 Boost Dice on attacks it makes, provided it didn’t make a full advance. This is particularly potent with units like the Command Ape that can Blitz it into position or the Mutates unit Clicker that can help it get to where it needs to be in order to send an enemy flying across the board. The Necroscourge Nexus went through several different versions during playtest before we settled on this one. I knew from the onset that I wanted a rule like Wither to exist as counter meta to Armored monsters, and a big nexus of dark energy seemed like a good place for this. Wither nullifies the Armored rule when a monster collides with it. The Nexus also has an ability called Swarm Hive that is specifically designed to help the Necroscourge Repurpose chain. A lot of the Necroscourge units’ abilities require them to hit and kill units; the Nexus offers units participating in an attack together to gain +1 Boost Die and Fury. But it’s not just good for Swarm units—who doesn’t want an extra Boost Die and Fury when combining their attacks?? 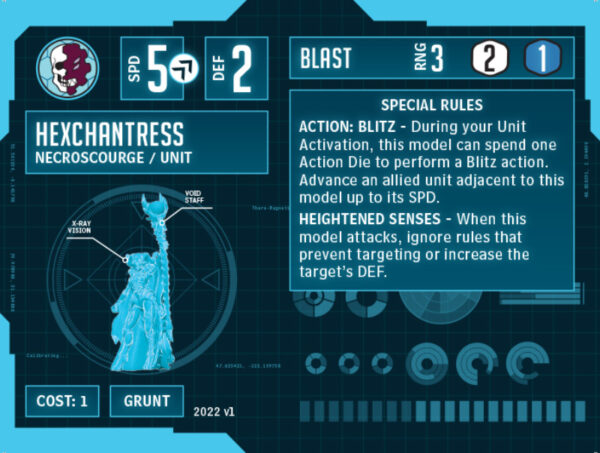 The Hexchantress is near and dear to my heart. Part of the development process is to know what each Agenda has access to, and game balance is carefully crafted to give each side access to the right tools while still retaining unique ones of their own. We knew it was time to give Destroyers the Blitz action, as this is important for the health of the Agenda and the balance of the game. But the Hexchantress offers some unique and important tools to her specific Faction as well. Because the unit movement phase happens before the attack phase, it is easy to find yourself in a situation where you make units that can’t do anything after popping out except die and feed your opponent Power Dice. Using Amalgamate from the Hurling Swarm unit, any of the units can repurpose in a Hexchantress, who can Blitz herself, the Hurling Swarm, or another created model elsewhere. The ability to move the Swarm’s auras around outside of the movement phase can be key to their playstyle. The fun doesn’t stop there. The Hexchantress has a blast attack with Heightened Senses, which allows her to ignore rules that prevent targeting or increase the target’s DEF. She can lead a combined blast attack into an enemy and with Heightened Senses, she helps the whole group find their targets. Get her under a Hurling Swarms Amalgamate aura, and she can use her blast attack to Repurpose models farther up field or claim an enemy model for you and then Blitz it onto an Objective space. 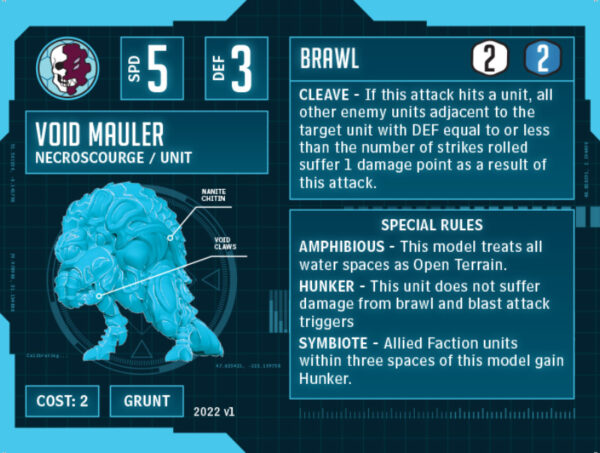 Children of Karkinos. These terrifying little trilobites are a key component to the Necroscourge Swarm, the tough center to the Swarm once it’s on the table. They have the ability Hunker, which prevents enemies from killing it with crowd-clearing abilities like Explosion. With its Symbiote ability, it grants Hunker to allied Faction units within three spaces, which forces your opponent to deal with the Swarm one by one. Lastly, this Amphibious crustacean adds some much-needed muscle to the Necroscourge package. Its 2/2 brawl attack has the Cleave trigger, allowing it to clear away enemy mobs. Watch out for these hulking murder machines—when they team up with a Hurling Swarm and Blade Revenant, they can become a factory of death, repurposing all of your enemies units into your own.

Well, crew, that’s all I have for now. Keep an eye out for the next few Insiders from me, as we will be wrapping up the Ancient Ones and First Guardians next, followed by the Vegetyrants and Necroscourge Factions soon after. Stay tuned, and don’t forget to share the hype!