Last week, we showed you the capstone models for the Legion of Mutates. This week, things will get a bit stranger with some of the oddest rules to ever come to Monsterpocalypse. I hope everyone is ready for the angry shapes!

This set of releases has a strong theme of reality-warping effects. The Conductor has the power to alter the very laws of physics, ensuring that reality always plays to its advantage. Tuners have similar powers to the Conductor though much less powerful. The Dervish, on the other hand is, quite literally just sentient whirling blades of death… 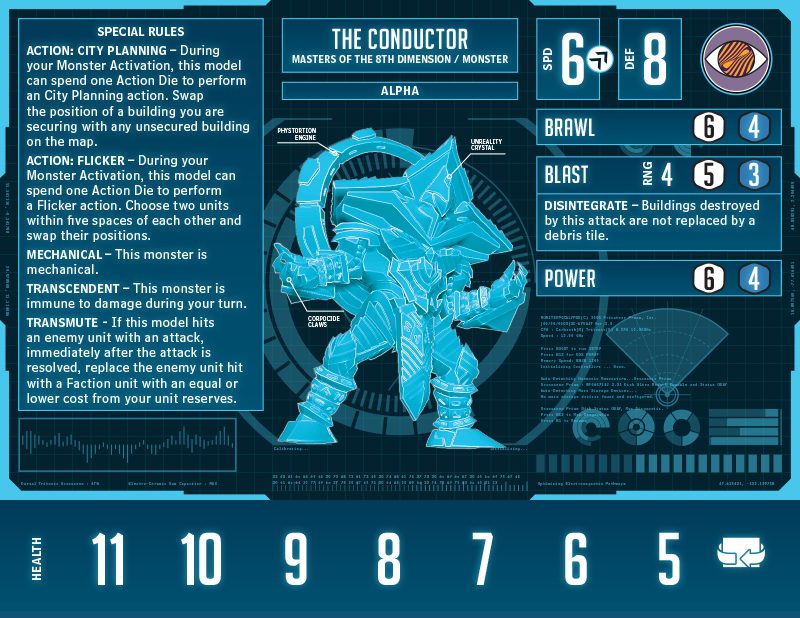 The Conductor itself is not particularly strong, having slightly below-average stats. They aren’t focused on throwing monsters around the city nearly as much as altering the city’s makeup altogether. City Planning, an action that has only previously appeared on a building, is constantly at The Conductor’s disposal. With it, your opponent will have a very hard time avoiding buildings they don’t want to collide with.

Flicker also allows this monster to manipulate unit positioning. Getting that Juror into position for Death Sentence is quite a bit easier with this, as any unit could be a Juror at any moment. It also allows you to swap enemy and ally units, creating the potential to clear screens. It isn’t as easy as something like Abduct, but if you switch your unit for an enemy unit that was screening, you can use a Draken Lander or any other monster turn unit movement to get the allied unit out of the way.

Transmute offers The Conductor one other avenue of attack. It can literally alter the form of a unit it has hit, turning it into a Masters of the 8th Dimension unit. Since this effect requires a hit, units destroyed by rampages, stomps, throws, rams, and body slams will not be affected; however, brawl, blast, and swat power attacks will net you one or two new units. It is always good to note that a swat power attack hits both targets of the power attack. So, if you swat a unit into another unit, you will spawn two units from your reserves. The final thing to note about Transmute is that the unit coming from your reserves must be the same or lower cost than the unit you hit. So, despite the fact that I know you all want to be replacing one-cost units with Jurors, I’m afraid you won’t be rigging any jury with this ability!

Transcendent and High Mobility on this monster are not meant to imply that The Conductor is flying above buildings or jumping over fires, but rather that it is simply phasing through matter it doesn’t want to deal with. Thus, The Conductor can simply step through buildings as if they weren’t there at all, appearing suddenly on the other side. Likewise, if prepared, it can make parts of its body incorporeal so nothing in its path will damage it. 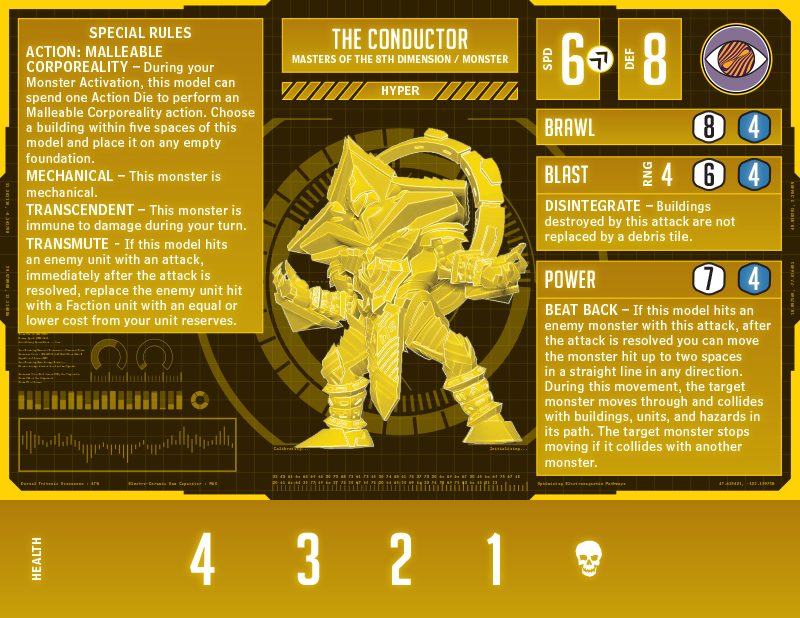 The Conductor’s hyper is downright mean. It is hands-down the strongest hyper we have ever made, though it is also short. Also because the player controlling The Conductor will not be able to step in and out of fires to activate the hyper, it will be up to your opponent to decide when it is time to deal with this terrifying form.

Malleable Corporeality makes any empty foundation quite useful. Empty foundations will come up from time to time due to the destruction of Myriad Singularities or The Conductor’s own Disintegrating blast attacks. This action means nowhere is safe from The Conductor’s devastating power attacks.

So now, onto the elephant in the room: the power attack Beat Back. Have you ever thought, you know what would make this throw real good? Another throw! Well, The Conductor has you covered. You have to hit the enemy monster, so only throw, body slam, and swat power attacks will trigger the Beat Back, but if you do, the damage potential is terrifying.

The Conductor’s hyper is one giant red button that you only press when you are ready for all hell to break loose. I imagine that a disco ball and strobe lights start every time this monster makes it into hyper. Then, if your opponent ends their turn without killing The Conductor, all the lights speed up and turn red! 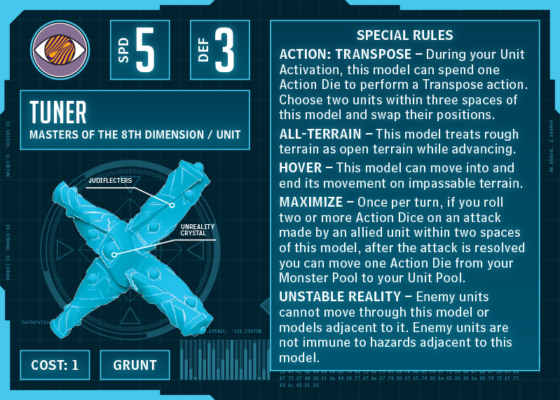 So, the Tuner does some similar things to The Conductor. The most obvious similarity is Action: Transpose and Flicker, Transpose just being a bit weaker than Flicker all around. That said, it is really great for setting up Berserk chains or getting Explosions into just the right places.

Speaking of setting up attacks, Maximize can effectively pay for your Tuner or its action once each turn. Do note the once-per-turn tag on Maximize! Having free Berserk attacks would be utterly devastating, and we wanted to be sure that wouldn’t happen.

Unstable Reality is Grappler but for units. Grappler is never coming to a unit (if I have any say so), but this rule is quite a bit tamer. Once, I was able to set it up with a Tuner adjacent to a fire, then I Transposed a Rocket Chopper with my own flying unit to destroy it. Doesn’t happen often, but it is really funny when it does. 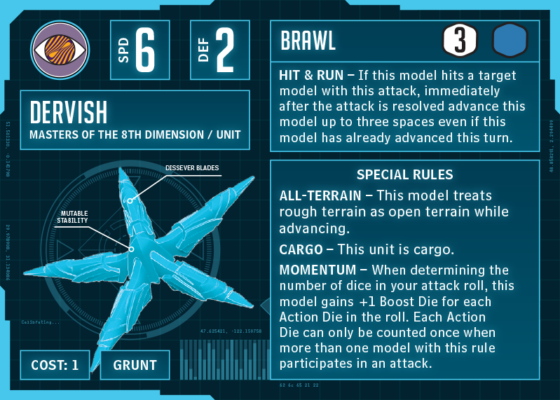 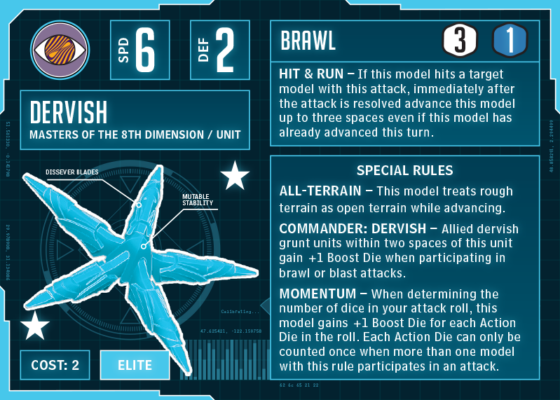 That brings us to our friendly rotating sentient blades. The Dervish is a very strange unit. The non-elite version has cargo, so the Facilitator can drop one off, but otherwise it appears unimpressive at first glance. It doesn’t even come with any of its own Boost Dice, despite being an attacking focused unit.

It all caps off with Hit & Run, which gives this model a strong sense of being a pile of animated whirling blades. Much more important, this model can reach out far after attacking. It can take objectives, contest buildings, and just general make a nuisance of itself. With only DEF 2, though, it won’t stand up to much—but still, the Dervish does ensure your opponent will have no choice but to deal with it.

Be sure to pick up these and the Legion of Mutates releases coming at the end of this month. And I hope these last few releases will generate that unsettling weirdness vibe I was aiming for while designing the Masters of the 8th Dimension.