As January begins, here are some of the latest and greatest Monsterpocalypse models headed your way in the New Year… 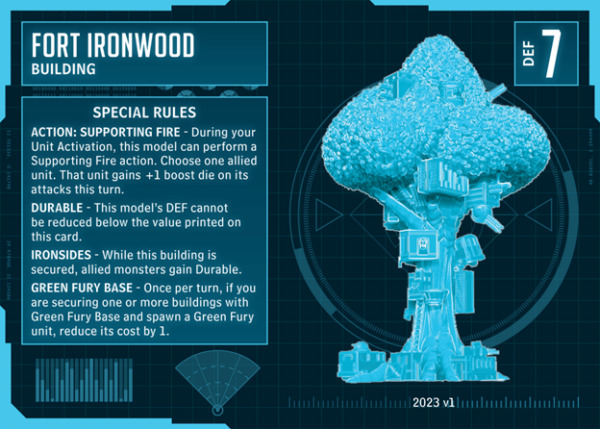 The Green Fury Base Fort Ironwood is an awesome addition to any force, regardless of that force’s Agenda. The base’s abilities have key components that make it a valuable choice when list building. Action: Supporting Fire has some noteworthy qualities: first, it can only be used during your Unit Activation.; second, it does not cost an Action Die to perform Action: Supporting Fire. (It’s free every turn you have it secured.) The building itself is DEF 7, and it has Durable, which makes it good for blocking rampage lanes and making your power base a little harder to disrupt. And finally, it has Ironsides—this means that while you have Fort Ironwood secured, your monsters gain Durable, which is ideal for high-DEF monsters like Sgt. Titanica and is great defense against monsters like Globbicus. All in all, this elaborate tree fort is an excellent choice for any player. 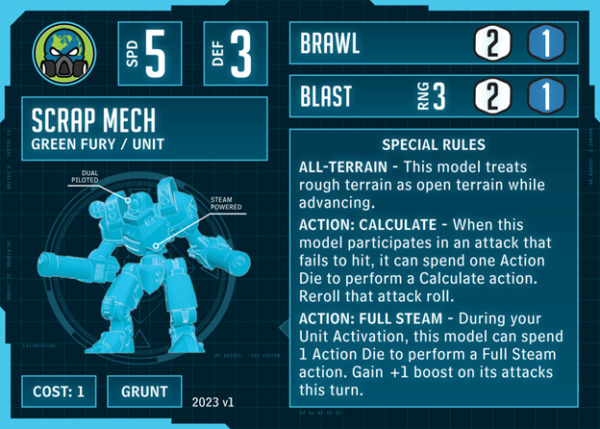 Grizzy may be Earth Knight’s best friend, but the Scrap Mech comes in as a close second. These combat mechs have two actions—Action: Calcuate allows them to spend an Action Die to reroll any attack they particpate in, and Action: Full Steam allows them to spend an Action Die for another Boost Die on their attack. The Green Fury monster Earth Knight can kick them up a notch when you play him by granting them Penetrator on their attacks by using his rule Puncture. When Earth Knight is in hyper, he loses Puncture but gains the ability Micromanage, which gives your Green Fury units Double Duty, and this allows Scrap Mechs to use both of their actions in the same activation, making them very efficent attackers. 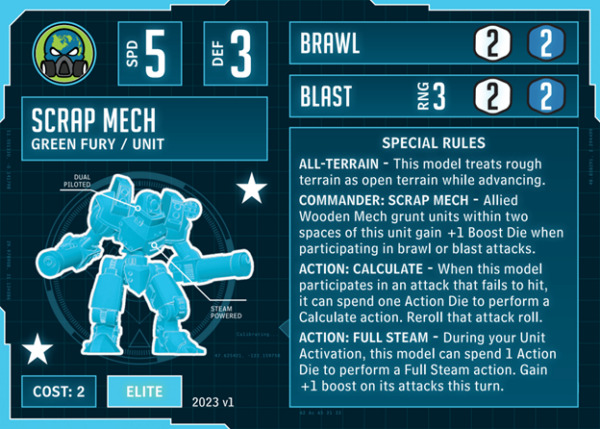 And don’t overlook the Elite Scrap Mech when building your Protectors list! Having a native extra Boost Die over the grunts on its attacks and also having Commander: Scrap Mech allows it to add a Boost Die to your Scrap Mech grunts nearby. Collectively, these steam-powered iron giants may well be a force to be reckoned with. 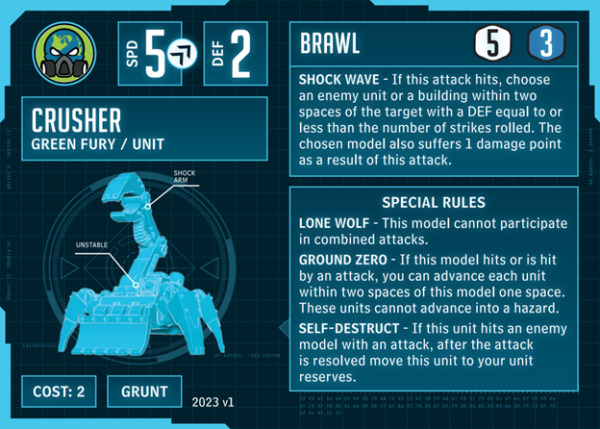 This shock trooper is prepared to send a Shock Wave through the Monsterpocalypse world. At speed 5 and with high mobility, these battle bots can get where they’re going and when they get there, they pack quite a punch. With 5 Action Dice possible and 3 Boost Dice native, they can make sure what you need destroyed gets gone. When they hit or are hit, they trigger their ability Ground Zero, which allows you to advance each unit (within two spaces of the Crusher) one space as long as it’s not into a hazard. This plays well in combination with the Crusher’s trigger Shock Wave. When it hits, you may choose an enemy unit or a building within two spaces of the target with equal or lower DEF than the number of strikes rolled to also suffer 1 point of damage. The best part is when the Crusher is surrounded, it can pull in a group with Ground Zero and hit them with Shock Wave. Just remember: this unit is a lone wolf, so it can’t join in on attacking synergy from the Scrap Mechs. It can, however, get a Boost Die from Fort Ironwood. Lastly, it has Self-Destruct, meaning if it hits an enemy model with an attack, it returns itself to your reserves. Now that’s not a bad thing. It may cost 2, but it also doesn’t stick around for your opponent to get their hands on Power Dice for destroying it.

That’s all for now, but keep your eyes open for what kaiju kaos—er, chaos—we will be previewing next for Monsterpocalypse!