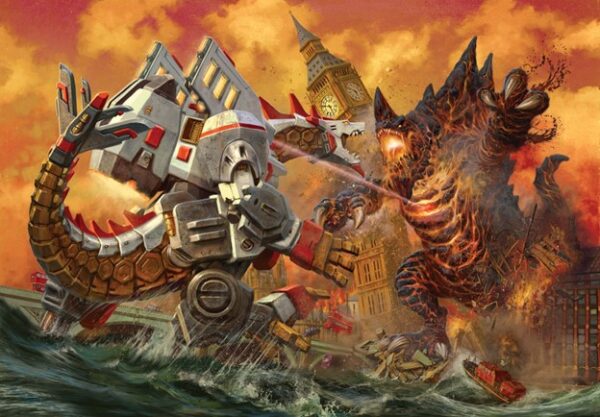 This amazing art illustrated by Russell Marks captures the clash of Magma Khan, ruler of the Monsterpocalypse, going toe to toe with Ultra Cyber Khan, Uber Corps Industries newest kaiju killer. But there is more to this story than meets the eye. Speaking of which, check out the fiction from the Megaton Mashup 2 rulebook. 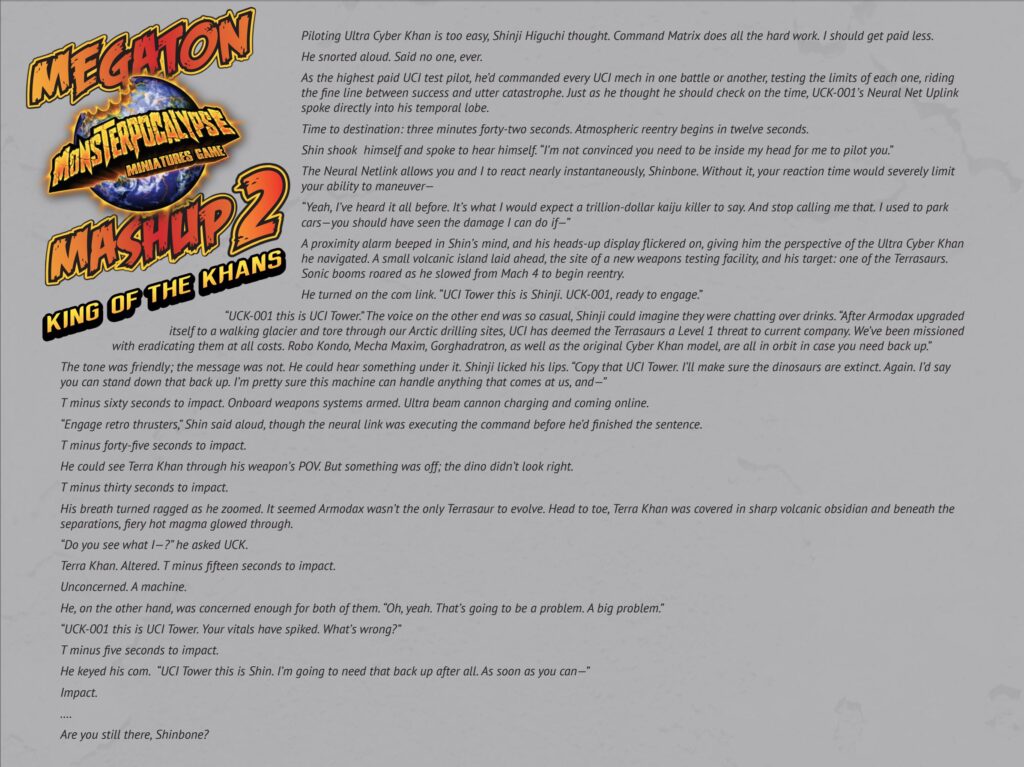 One of the little details that I love about this story is that it hints at backup is waiting for Ultra Cyber Khan’s pilot if he needs it. And after taking one look at the Khans, Shin knew he would need it.

In the box is a new and exciting way to play Monsterpocalypse. In Megaton Mashup 2, you build a force list of five monsters, twelve buildings, and twenty units; you select one of those monsters to be your Champion at the beginning of the game. Unique to this box is a brand-new Operation deck that you and your opponent cycle through, completing objectives or playing trap cards. Completing objectives grants you resources to speed things up and get your Champion into the fight sooner; activating trap cards grants you Megaton, which you use as a currency to summon your other monsters into play.

Check out a few examples of the objective and trap cards you’ll find in the Operation deck. You can see that each one grants a different type of reward. Now, there’s is a fourth type of reward not shown below—but we’ll keep that a secret for now. You’ll find out what it is when you open your own box! 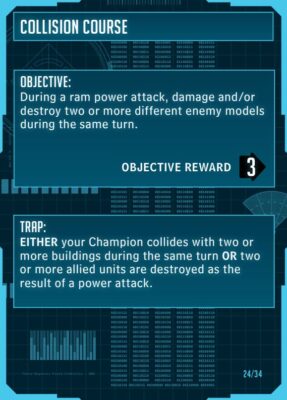 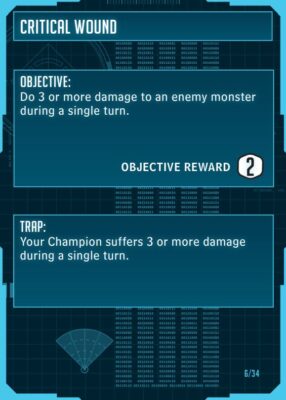 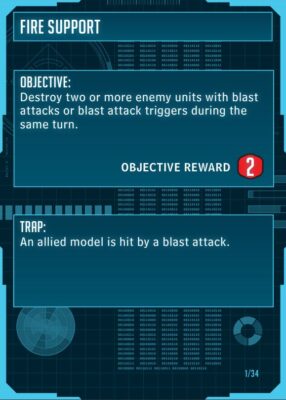 As you can see, the objectives and traps form a mini-game that requires some forward planning to complete, but as you might imagine, the rewards can really stack up. Completing objectives can get you the resources to chain together some awesome turns, and setting up traps may not be easy, but if the tradeoff is having an ally come in to save the day, it may be exactly what you need to turn a match around.

Now the moment you have all been waiting for. The main event! The clash of the Khans.

Let’s get ready to RUMBLE!

In this corner, the challenger—weighing in at a whopping 66,600 tons, the flying frying pan from Japan, the Mechanical Monster with the Most, Ultra……. Cyber……. Khan!

And in the opposite corner is the champion, weighing in at a clean 60,000 tons. The King of the Monsterpocalypse, the Spawn from Places Beyond! MAGMAAAAA KHAAAAAAAAAN! 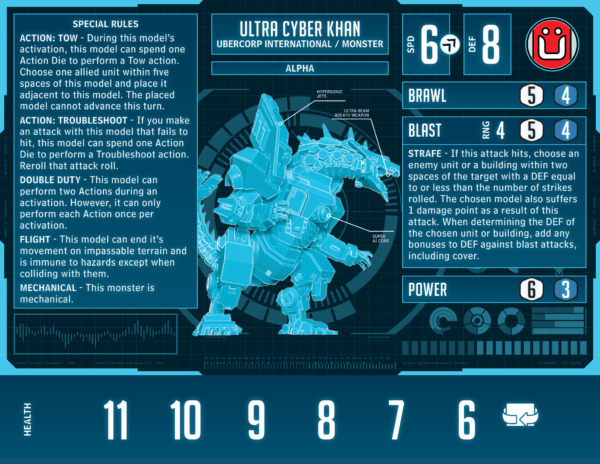 In alpha, Ultra Cyber Khan is a machine running at peak efficiency. With Speed 6, high mobility, and flight, this mechanical dragon can get to wherever it needs to be. With 6 of his 11 health in alpha, he spends a majority of the game in this form. UCK’s action Tow is an excellent way to prolong his life by letting it screen itself from danger with an ally. His favorite little buddy is the Robo Brontox—with its Feedback ability, the enemy loses a Power Die and you gain one if they kill Robo Brontox with their monster. Using tow, UCK can drop a “RoBro” on a power point to trigger Intensify, granting a Boost Die to attacks near the unit, including to Ultra Cyber Khan! And with Jam on RoBro, the enemy will not be able to get close and use actions without first removing this annoying robot roadblock.

Its other action, Troubleshoot, allows Ultra Cyber Khan to reroll if it misses an attack. This will come in handy with its Range 4 blast attack with Strafe. Since UCK has Double Duty, it can Tow and Troubleshoot in the same activation. This monster wants to use its mobility to reach hard-to-get-at spots so it can block itself in and start shooting that amazing blast attack from behind a screen of safety. 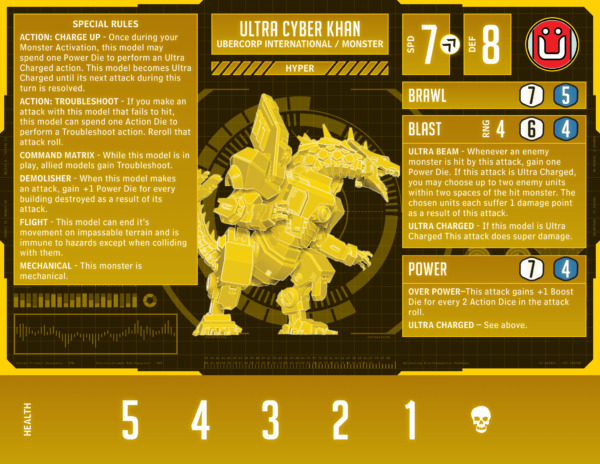 In hyper, Ultra Cyber Khan becomes a terrifying assault-weapons platform, ready to home in on its targets and destroy them. This monster goes from Speed 6 to Speed 7 and every little bit of speed counts when you’re chasing down your enemies. It gains a Boost Die on both its brawl and its power attacks. UCK loses Action: Tow but gain Action: Charge Up. This action is Monsterpocalypse’s first keyword reference rule. When you use Charge Up, you simply spend a Power Die for UCK to become Ultra Charged until its next attack during that turn is resolved. This comes into play on this monster’s blast and power attack triggers. On its blast attack, it has Ultra Beam, which has a few different parts to the rule. First up, if an enemy monster is hit by the attack, you gain a Power Die. If the attack is Ultra Charged, you can choose up to two enemy units within two spaces of the monster hit. The chosen units each suffer 1 damage. The trigger Ultra Charged also says that if this model is Ultra Charged, this attack does super damage. If you shoot an enemy monster with UCK’s blast attack, you gain a Power Die. If you charged up, you also get to hit two nearby units and the attack deals super damage. Boasting Action: Troubleshoot in hyper, this monster has the ability to use its reroll, but because it lost Double Duty, it can’t use the reroll during the same turn it uses Action: Charge Up. That’s okay, though—with Command Matrix, this monster gives out its Troubleshoot to every other model in its list, so its partner monster can benefit from that sweet, sweet reroll. UCK’s kit doesn’t stop there. This monster has Demolisher in hyper, helping it pick up an extra Power Die from any building it destroys. And with Overpower on its power attack, Ultra Cyber Khan has an exceptionally accurate power attack to make use of Demolisher. And if it’s Ultra Charged, its attack does super damage. 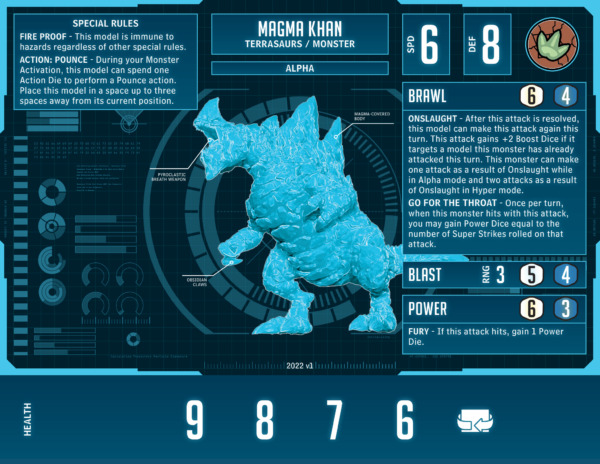 On to Magma Khan! In alpha, Magma Khan is much simpler than Ultra Cyber Khan, but that doesn’t make him any less deadly. With only 4 of his 9 health in alpha, Magma Khan is only in this form a short time. But don’t let his low health pool fool you. With Fireproof lowering incoming damage from buildings, Magma Khan has some terrifying staying power. Speed 6 and no high mobility may make Magma Khan seem like the slower of the two monsters, but Action: Pounce helps him get where he is going, and Fireproof ensures he does not need to walk around hazards to avoid damage. Once in combat, Magma Khan unleashes an Onslaught of brawl attacks. With Go for the Throat, MK is hoping to roll a bunch of Super Strikes on his attack, and with two shots at it, he has a good chance to get some juicy power out of it. The best part is that Go for the Throat is not limited to monsters, so he can gobble up a unit and hope to get a good power spike from it. To top things off, Magma Khan also has Fury on his power attack to help get the power train rolling. Hyper is where it is at for this heavyweight. With 5 of his 9 health in hyper, this is where Magma Khan’s furnace really starts to glow red-hot. He loses Action: Pounce but gains a new kind of threat extension with Action: Power Blast. This action allows Magma Khan to extend that pyroclastic breath weapon of his out farther for the cost of a few Power Dice. However, this monster has power to spare. Its ability Omega Titan makes Magma Khan a power battery, generating a Power Die every time he hits or is hit. Mix that in with Fury on all three attack profiles, and Magma Khan is generating a ton of power. To pair with Action: Power Blast, Magma Khan also has Combo Strike on his blast attack. This means that Magma Khan can line up with the opponent, blast a building and generate a ton of power, and trigger Combo Strike and Fury. This will let UCK make a pumped-up power attack with lots of dice. One of my favorite plays is to line up with a place not safe for most monsters and use Action: Power Blast to extend the range of MK’s blast attack. I then blast a building that I would normally be lined up with and reduce it to a hazard (which I don’t care about because of Fireproof) and, thanks to Fury and Omega Titan, get 4 Power Dice back from that building, refunding more than can even be spent on Action: Power Blast and pumping up my power attack to super-accuracy levels. One of the coolest parts of playing with so much power is Magma Khan’s ability Pyroclasm, which checks how many Power Dice you currently have in your Power Pool. If you have 5 or more Power Dice, Magma Khan gains +1 DEF, brining him to a respectable DEF 9, and with 10 Power Dice in your Power Pool, Magma Khan goes up to Speed 7, making him terrifyingly fast for such a tanky monster.

Finally, I want to note that these monsters were not chosen at random for Megaton Mashup 2—they were, in fact, chosen by the people who voted them into this box last year during the March Madness competition! This year, we’re holding that contest again, this time leading up to the launch of Megaton Mashup 2, so check out the <<link>> below. Get your vote in and don’t forget to keep an eye on Privateer Press’ social media channels to keep up with everything you need to know about how the voting is going!

Well, monster fans, here’s hoping you’re pumped up and ready to play Megaton Mashup 2. Let us know on Twitter, Facebook, and Instagram what you think of these new monsters!