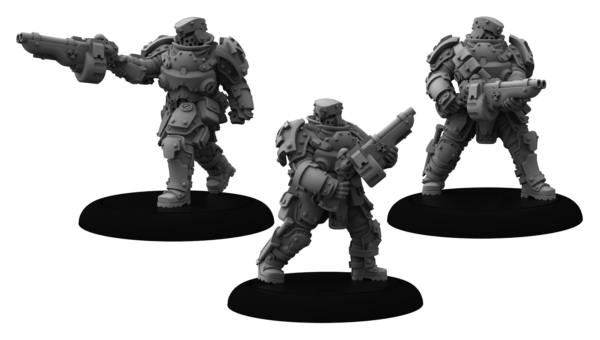 After completing their mandatory service to the Motherland, the Winter Korps’ hardiest veterans are allowed entrance into the Shock Troopers, should they choose to reenlist. These professional soldiers are well treated with good pay and expanded privileges, but they are also issued the best conventional arms and armor Khador can offer. The heavy Shock Trooper armor is alchemically hardened and treated against heat and cold. Shock Trooper Gunners are issued heavy scatterguns that unleash hailstorms of deadly shot. It is the role of the Shock Trooper Gunners to seek out and destroy enemies in cramped urban areas, a task for which they are ideally suited.

Clad in hardened Shock Trooper armor, the Pikemen are Khador’s elite warjack hunters. True inheritors of the indomitable Khadoran spirit and the ancient traditions of the Motherland’s Iron Fang ’jack hunters, the Shock Trooper Pikemen take to the battlefield armed with only their heavy blasting pikes and reinforced shields. Through sheer skill, determination, and an iron will, they bring their volatile weapons to bear against any foe willing to stand against them.