In this Insider, we begin a series of author interviews with the writers behind our next releases for the Iron Kingdoms RPG, which will be available to back on Kickstarter this fall. First up: Chris Handley, well-known gamer, writer, podcast host, and computational chemist. (In fact, he’s the only computational chemist we know!)

I jumped into the Iron Kingdoms all the way back with WARMACHINE Prime, picking up the Cygnar battlegroup. That army grew over the years to be a full gun mage force alongside other armies I collected, such as Gatormen and Skorne. Those armies have moved on as I had to downsize when I was moving home, but I have the start of a new Cygnar army, which my current standard of painting can do justice.

This entirely depends on the project. If defining a part of the world or a Faction that exists in the world already, there is the need to hit all the right notes and beats. But even as you do that, you find areas that were never considered previously. It might even be as simple as “What do they farm in this part of Immoren?”

For a scenario where we are into terra incognito, you might have a sense of where you want to begin and where you want to end, but the writing process, as you try to accommodate all manner of player groups that might interact with the material, leads you to revelations about your intended plot and new angles on antagonists or a place you hadn’t considered.

Working with the team was great because I am relatively new to the D&D 5e system while being a long-time fan of the setting for the wargame and the previous iterations of the RPG. So, having a group of like-minded writers with share a similar love of the setting who you can also bounce mechanics off was important. Plus, it’s always fun to share cat memes and in-jokes when you are writing – especially if you are writing freelance and such writing is an escape from your rather technical and scientific day job!

The Iron Kingdoms is not a typical fantasy setting. It doesn’t fall into typical tropes, and it captures the drama and action of certain Napoleonic and Victorian drama shows and movies.  As a chemist, of course I love the alchemy of the setting—something I want to dive into more—and the merger of magic and technology in a pragmatic way. The fact that certain spells are not present in the setting compared to D&D 5e makes the setting very dangerous! You can easily run campaigns about soldiers on the frontline, private investigators in Corvis, or even high society politics.

When possible, I like to playtest scenarios or new rules, but a bit of gut feeling and an analytical eye helps. I’m pretty good with numbers. But having some playtesting, if only to highlight some game-breaking combinations, helps. I tend to be quite conservative then, if I am adding a new class or species to the game—these options should be fun and unique but not invalidate the other options.

Listen to your developer. Read the brief. And talk to the team all the time when you can. Even if you may not think you are great at writing or you’re having trouble with some new scenario concept, these issues can easily be solved if you check the brief and ask for advice. Any flaws, you can be coached through, and any critique is not personal. A team wants everyone to succeed together.

A lot has happened with the kingdom of Ios. That is a massive understatement. And compared to previous iterations of the IKRPG, we never had such details or rules covering Iosan elves, their gear, and their warjacks. The opportunity to adventure into that shadowy kingdom is quite a scary prospect. 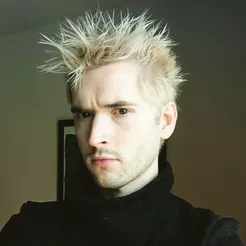 Chris Handley by day may be a computational chemist and programmer, but he also writes as a freelancer for a number of roleplay games with well-known IPs. He is a long-time wargamer, working in a hobby store during his undergraduate studies, which was when he discovered the recently released game WARMACHINE. Since then, he has had a lasting love of the unique setting and the wargames. Chris also is one of the hosts of the RPG podcast Darker Days Radio, working with the team there for over 10 years, where they review horror RPGs, interview the writers and creators of these games, and provide original content. Chris has also published material through the DTRPG community content portals and is the senior writer for science magazine, CYBR. Chris has held talks and panels at a number of gaming conventions in the UK, including UKGE and Dragonmeet, and also at online events such as Virtual Horror Con. Given his love of the city of Venice, he would likely live in Corvis if he could.