In our buildup to the launch of our next Iron Kingdoms RPG launch, we continue our interviews with the writers behind the magic. Up next: Steen Comer, mediapathic extraordinaire…

Hello! Pleased to meet you. Won’t you come in? I’m Steen Comer, and when I’m not creating worlds for the Iron Kingdoms, I’m creating worlds for my own weird fiction or working as a copyeditor introducing otherwise brilliant academics to Our Friend, The Comma. If you want to find me on the Internet, I’m “mediapathic” essentially everywhere.

My first experience with the Iron Kingdoms was probably when a coworker at a bar where I worked at the time brought in some minis he was painting, and showed them around. He pulled out what I think was a Cryx Wraith Engine and I immediately thought, “I have no idea what’s going on here and I want in on it.” 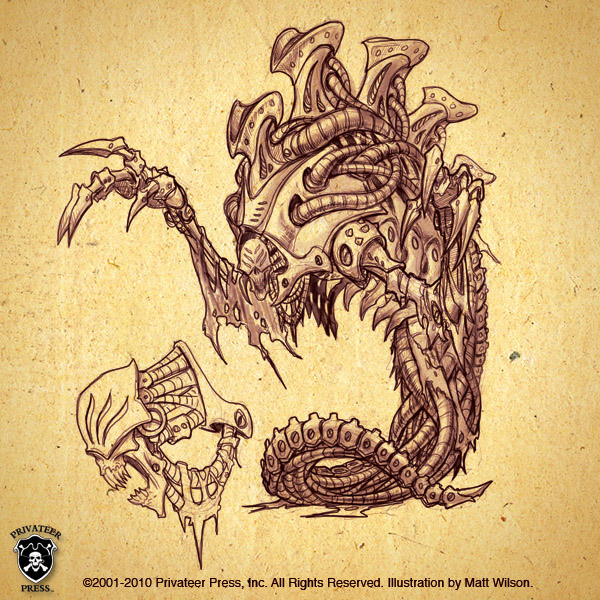 Whenever I get the spec for what area the editors are letting us play in, I instantly see a couple of things that I know I am excited to work on. For example, on Borderlands & Beyond, as soon as I saw that we were going to be developing the Bone Grinder, I knew I had to be a part of that. I had done some work on the Bone Grinder for Iron Kingdoms Unleashed while visiting a friend in Louisiana, and the swamp and the muck there strongly influenced them for me, so I have good memories of working with them and feel a certain affinity for them. There were some other new things in Borderlands & Beyond I don’t think I’m allowed to talk about yet that I saw and was instantly struck by the possibilities of, and I got giddy about where we could take them. So, I know some places that I’m going right from the beginning. The discovery comes from taking those core ideas and weaving them together with the rich fabric of ideas that already exist in the Iron Kingdoms, which acts as a sort of substrate on which a wide variety of cool things can grow.

Thanks to advances in modern technology and the weirdness of the world we now live in, on this project we had new opportunities for real-time collaboration and communication. As soon as we got our orders, we immediately started bouncing ideas back and forth. This had two main effects: first, it was rapidly clear who had the strongest ideas for the various things that needed to be done, so there was a natural division of labor. And second, it allowed for a blurring of lines between creators, leading to a situation where I couldn’t tell you if some of the concepts I detailed came originally from me or one of my collaborators. This created an environment where great ideas took primacy over ego, and I think ultimately this wound up making everything we produced much stronger.

I’d also be remiss if I didn’t mention how awesome said collaborators are. People who like to create RPGs are a strange and unique breed, but we come from a variety of places. The drive to create cool worlds for others to play in brings with it a huge number of wide ranging interests, and the conversations with people equally passionate as me about completely different things are always fascinating. Plus, the off hours semi-regular Matt And Steen Get Weird sessions were, I hope, as fun for the others as they were for Matt and me.

Many RPG worlds feel somewhat limited by a sense of needing to stay “on brand” to the vibe of their world. The thing for me that really defines the Iron Kingdoms is that it feels like the remit is “come up with something awesome, and then figure out how to make it work.” Because the Iron Kingdoms are so vast and epic in scale, both in space and time, and because of the presence of weird technologies that are well defined but somewhat open-ended, we can make this work, and it doesn’t fall apart into an incoherent mush as it would in some other systems. I always feel encouraged to get as far out as possible and that the editors will hammer the results into something coherent. And, somehow, they continue to do so, for which I offer them my immense gratitude. From a writer’s point of view, creating a Khadoran warcaster and creating a Farrow Bone Grinder feels almost like writing for two different games. But working in the Iron Kingdoms not only makes that possible, it also ensures that when they meet it will be awesome. 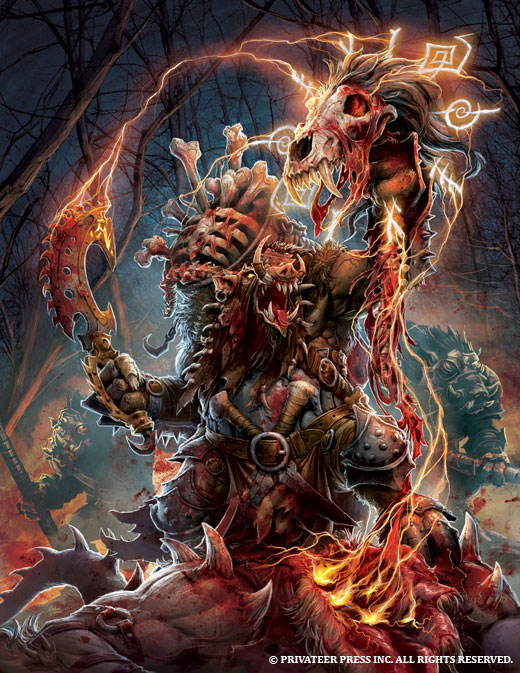 Honestly, I have great confidence in my concepts and very little confidence in my instinct for mechanics, so I sneakily try to assign myself things that don’t need as much playtesting. Plus, I don’t actually have much opportunity for playtesting, practically speaking. Essentially, I build the shiny toys and I’m pretty sure Matt Goetz comes into the shop after hours and makes sure they actually work.

One of the first conversations I had with Matt the first time I worked on an Iron Kingdoms project was a horror story he told me about a writer who made the mistake of mentioning in passing that a certain character was at a battle some 500 years ago when, in fact, he was not. Thus, it was imposed on me how seriously Iron Kingdoms takes continuity. The real lesson here, though, is not that continuity is essential, but rather it’s important to find the core concepts that make up the genetic makeup of whatever game you’re writing for. For the Iron Kingdoms, those include the deep history, which forms a strong scaffolding for the huge variety I talked about earlier. For something like Eclipse Phase, it could be the philosophical tension between the post-human condition and cosmic horror. Every game has its core fibers that twist through everything, that make it feel like that game and no other. Find those, and play on them, not against them, and you can use those strengths to propel your ideas places they would never go on their own.

Though, I suppose you asked this as what not to do, so, uh, don’t not do that.

Well, picking favorites is of course like asking which of your family members you love most, so I refuse to say the most. But I am really excited to see how players react when we draw back the veil a little on Ios, and they get to see what’s been going on there (spoilers: writers are generally not well-adjusted people). And I want to see how folks engage with some of the new abilities we’ve created. I specifically crafted some new spells that I designed to both have obvious uses but also reward the creative player with some seriously weird narrative side effects, and I can’t wait to see what people do with them.

Really, what excites me the most about any Iron Kingdoms work is the scope of the world we get to work in. There are so many stories to be told, and I’m immensely grateful to be able to give people some of the things they need to tell them! 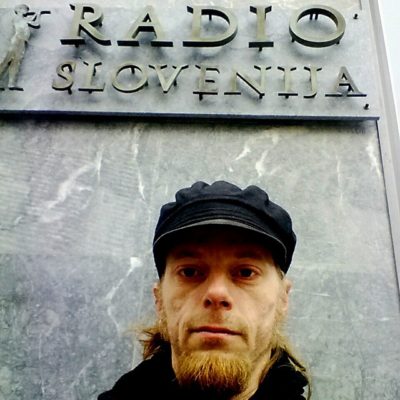