Leading up to the release of five early iterations of some of the most powerful warlocks in Immoren, we’re showcasing each of the rule sets currently in playtest in this series of Insiders. If you need to catch up, you can find Barnabas here, Makeda here, and Madrak here. Now it’s time for you to see Krueger the Stormseer. 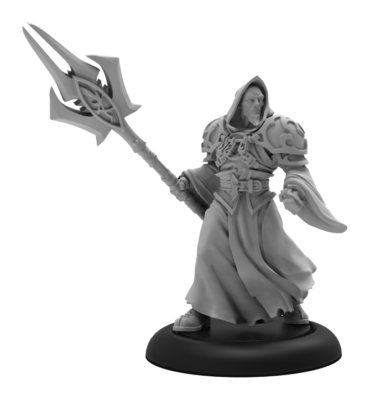 Krueger is a long-lived warlock due to his clever strategies and willingness to sacrifice others for the cause. This version of Krueger, however, shows him in his slightly more idealistic youth, when he was not quite yet willing to sacrifice anyone and anything for power. That doesn’t mean, of course, that he isn’t above stealing a little power boost from time to time.

Bleed Power – At the beginning of this model’s activation, it gains 1 fury point for each friendly Faction construct model within 3 ˝ of this model up to its FURY.

Lifeline – Once per turn, this model can transfer damage to a friendly Faction warbeast within its control range without spending fury.

Reload [1] – This model can spend fury points to make up to two additional ranged attacks with this weapon during its Combat Action.

Krueger 0 should really have a strong full-warlock Krueger (somewhat smaller) vibe. Despite being younger, he still has access to his signature lightning hazards thanks to his Lightning Blast attack. Fleeting Storm is a callback to Windstorm, and Lightning Blade is a different take on Lightning Tendrils. You can see the direction he will eventually take as he grows into a powerful force to be reckoned with.

Bleed Power and Lifeline both show his tenacity and willingness to do some not-so-tasteful things. With the Bleed Power ability, you cannot cast spells before it triggers, so don’t think you can do some crazy overcharge and make four clouds with him. The ability is designed, however, to give him a solid place in the Bones of Orboros theme list, where he can run just a single Woldwyrd and still be able to fill up on fury by standing near Shifting Stones. Note, though, he will mostly lose access to Lightning Blade in the theme, so there is a bit of tradeoff there.

Lifeline gives him some survivability outside his own fury pool. It is important to note that although Lifeline requires a friendly Faction warbeast, that warbeast does not have to be a part of Krueger’s battlegroup. Krueger is sufficiently tenacious and crafty that he can sneak his own influence in on warbeasts in friendly battlegroups.

Krueger the Stormseer should find a place in all three theme lists he can be a part of. He won’t be called out in Devourer’s Host, but he makes it into all other theme lists by virtue of being a Blackclad solo.

There is still one more warlock to come, so stay tuned for him, and be sure to act lightning-fast to get your own Krueger next month!