Some of the most powerful warlocks in HORDES had their rise to power far before the wars of the Iron Kingdoms spilled over into the wild places of the world. This Insider is the first in a series leading up to the release of five “zero-level” warlocks. The rules in these Insiders are still in playtest and are therefore subject to change. 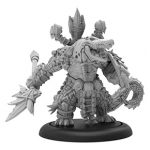 As bringing these younger warlocks to life is all about revisiting events from their pasts, I think starting with Barnabas makes the most sense. Before almost all the characters currently living in the Iron Kingdoms were even born, Barnabas was uniting the strength of the Blindwater, fighting in savage contests of strength to prove he was the ultimate conqueror.

Minion – This model will work for Circle, Skorne, and Trollbloods.

Blood-Quenched – This model gains a cumulative +1 STR and ARM for each enemy model it destroys with a melee attack during its activation. This bonus lasts for one round.

Gatorman Warlock – This model can have only Minion Gatorman warbeasts in its battlegroup.

Relentless Charge – While advancing as part of a charge, this model gains Pathfinder XICONX.

Henchmen [Gatorman Posse] – Choose one friendly Gatorman Posse unit at the beginning of the game to be Henchmen. The chosen unit gains +1 SPD and MAT and Relentless Charge.

Shield of the Conquered [1x]

While in the spellcaster’s control range, models in this model’s battlegroup gain Murderous for one round. (A model with Murderous gains an additional die on melee attack rolls against warrior models.)

Barnabas has a much more distinct focus on gatormen in this incarnation. His Henchmen rule is intended to focus on the core of his early time some 200 years ago, that of leading the gatormen as a united force. Essentially, this posse are the elites who fought by his side during the bloody carnage while forging the Blindwater. +1 SPD and MAT makes the posse match Barnabas’ own statistics, and the fact that they gain Relentless Charge means he can take over for a gatorman witch doctor quite well. 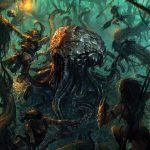 The rest of his toolkit is focused on himself and his warbeasts, granting them the same Blood-Quench rule he has, allowing him to have a very aggressive playstyle. In conjunction with his naturally high armor, shield, and battle host, his armor can become quite impressive. It won’t happen often, but if he can kill three models with a warbeast within 2˝, he’ll have 24 armor! With powerful base attacks, players will have to be sure to keep an eye on him.

Murderous Intent, a fun new spell, allows Barnabas to make the swamp horror really shine. For a cheaper battlegroup a bone swarm and bull snapper can give Barnabas access to powerful animi, making him nigh unstoppable. Since Murderous Intent only costs 2 Fury and he has three base attacks, you’ll often cast it even when Barnabas is the only one affected.

All in all, Barnabas will be getting a lot of use in the Blindwater and Will Work for Food theme forces. And he definitely lives up to his title of conqueror.

Be sure to check back in each week to see another new HORDES lesser warlock. And don’t forget to pick up your own Barnabas come this September!