Goodbye is probably the hardest experience you must deal with. It’s an expression of good wishes when parting or at the end of a conversation. You say goodbye to friends and family after gatherings and even when you part ways with coworkers as you leave a company. No matter how good you are at it, it’s never easy.

I’ve always struggled saying goodbye to friends new and old, especially at conventions. Long weekends of countless hours spent with so many people enjoying the games, hobbying, and sharing stories. After the inevitable goodbye dinner, where, of course, we would always see how well a restaurant can handle 20–40 people on a Sunday night with no notice, it was back to the convention site to wrap up and squeeze out one more memory from the weekend. I always went out of my way to make sure I was there until the last possible second. One more laugh, one more story, one more anything. Even with my best efforts, it always made me sad to see the empty chairs in the convention hall being stacked, the vendors packing up, the cars with friends heading home. Despite what I could do to stretch the moments out, I would eventually admit defeat and let the events of the weekend slip into legend.

In 2015, an opportunity arose that I couldn’t refuse, and I said goodbye to my family at Privateer. It was a difficult and heartbreaking decision to leave behind the amazing teams and friends whom I had worked with. Over the last six years, though, I was beyond overjoyed to watch the community grow and evolve. But today’s Insider isn’t about goodbyes it’s about new beginnings and sweet Retribution alternate scheme.

Today I am happy to announce that I have accepted a position to return to the fold at Privateer Press. As I sew on my skull and crossbones once again, I’m faced with a difficult decision: which WARMACHINE/HORDES army to paint and put on the table first.

There are a ton of alternate paint schemes floating in my head and a few studio schemes I would love to try my hand at. One of my favorite alt schemes I did a few years ago belongs to a small batch of Retribution of Scyrah themed as TRON: Legacy. The models were well received on a few painting groups on Facebook, but unfortunately, I ran out of time before I could get the army onto the table. With Warfaire Weekend only a few weeks away, I want something that looks good and can be done quickly, which I think this paint scheme is perfect for.

For today’s Insider, I’ll be taking you through the speed painting of Ret-Tron-bution.

Let’s pop in the TRON: Legacy soundtrack and see if we can take on the challenge of the grid.

First, start off by making sure you have a light, even coating of primer. Try not to go heavy, as we want to preserve as much detail on the model as possible. 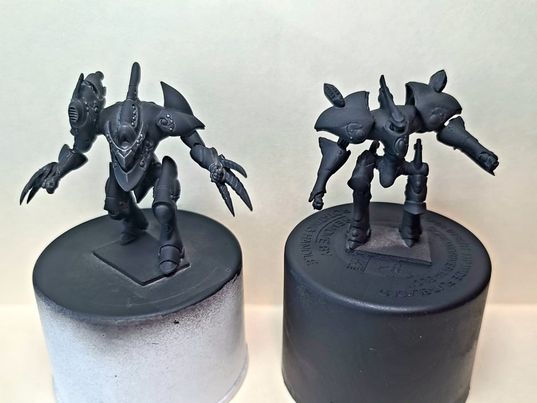 Primer black is dark, but we want a little bit darker and a little bit of sheen coming from the model. So, to start off with, we’re going to do a full model basecoat of Thamar Black. 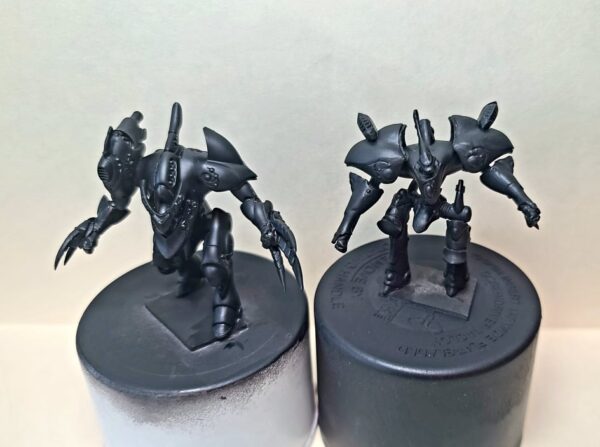 Now it’s time to start working on the glow for the model, focusing on the recesses and accent areas where we want to see a flow of energy. Let’s start the glow with a base color of Khador Red Highlight. Don’t worry if we are a little sloppy about letting the paint get out. The best part of this paint scheme is that we can easily reclaim areas with Thamar Black to tighten up the look as we move from area to area. 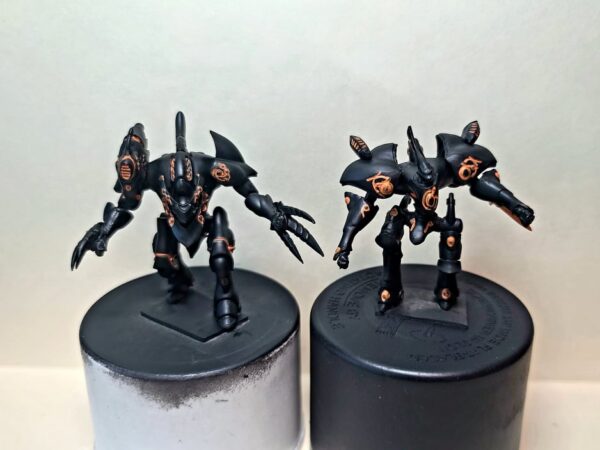 Next, let’s take a moment and work the higher areas of each recess with the first highlight of Ember orange. The important part of this step is to make sure to leave areas of the Khador Red Highlight from the layer below. When we do this and combine it with the final highlight in the next step, it will really give us that orange glow we are looking for. 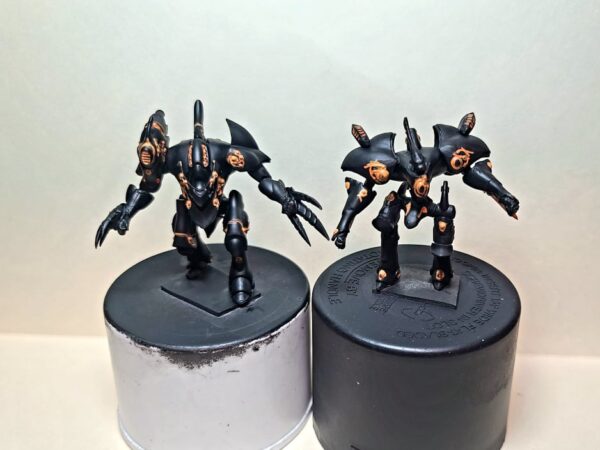 For the final highlight of yellow, we will be using Heartfire. Focus on picking up the higher areas or where you think the energy is originating from. If you aren’t speed painting, a small amount of Cygnus Yellow can be used to highlight the highest areas. While working on this step, it’s also the perfect time to reclaim some of the areas where the color has gotten out of the recesses on the model by using some Thamar Black. 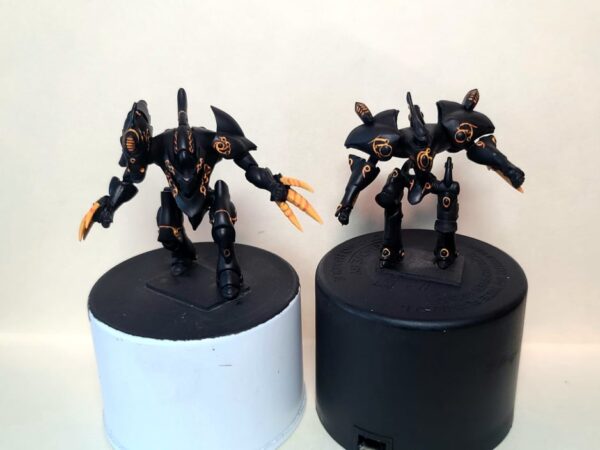 Now it’s time to work on highlighting the black armor. If you aren’t doing any type of speed painting, you can focus on doing a nice smooth blended transition from the raised areas down with glazes of grey all the way up to white to make some amazing definition on the models. For me, though, it’s all about speed. I only focus on the highest areas or where we want to define a bit of definition in black. I’ll start off by using a bit of Greatcoat Grey. 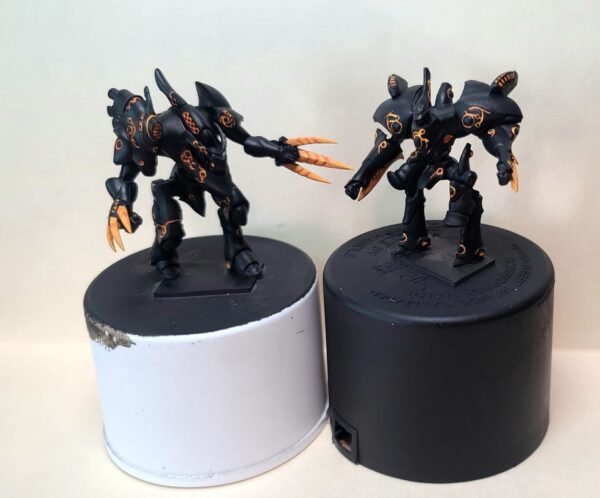 Next, let’s use a little bit of Ironhull Grey to add some more definition and to raise the level of the highlight up. Again, no worries if the paintbrush gets away from you—totally not a big deal, as Thamar Black will be used at the end of the next step to clean up any lines or errors that came up. 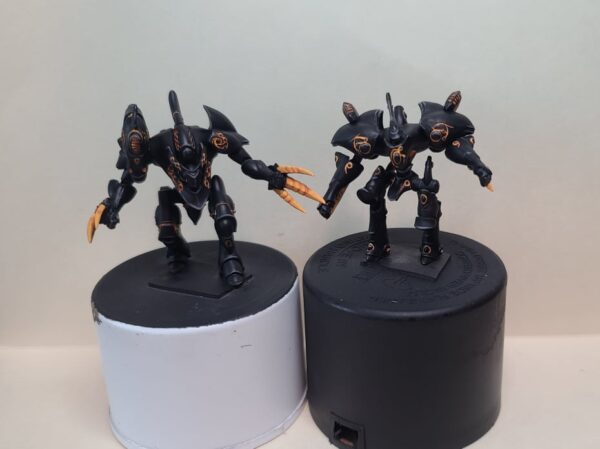 Now it’s time to make our final highlight for the black by mixing a bit of Frostbite with the Ironhull Grey. This color will be our highest highlight and should only focus on the areas we really want to stand out or to draw attention to. The final part of this step is to use Thamar Black to clean up any areas and smooth out the black again. 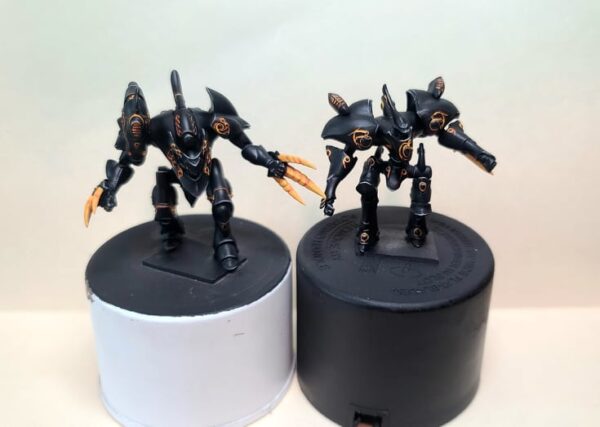 With the black smoothed out, we’re ready to seal and base the model! 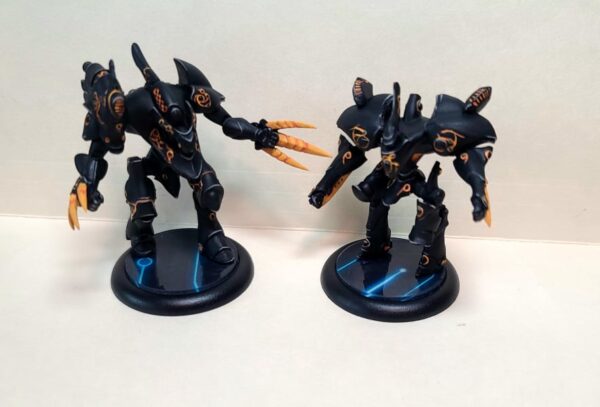 And there you have it: a super-fast and efficient way to get some great-looking models onto the table quickly! 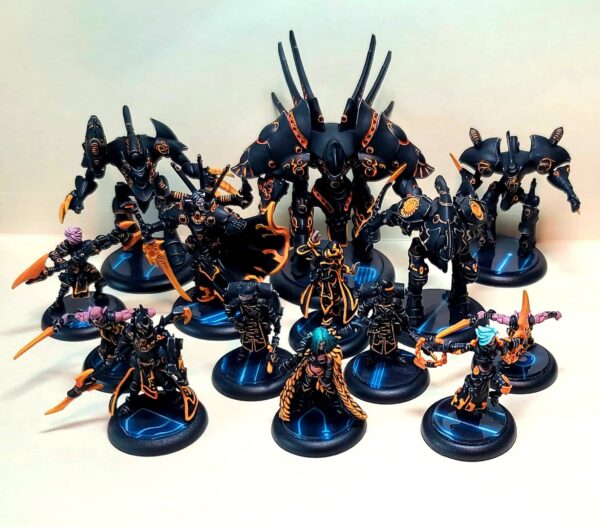 As I said, there isn’t a moment to lose, what with conventions beginning to pop up again at last. So, I’m off to give it the beans and put as many models onto the table as possible! Please come say hi, check out the booth, and see how the Ret-Tron-bution turns out at Warfaire Weekend November 5-7th in St. Louis, Missouri!

The post Goodbye Or Until Next Time appeared first on Privateer Press.