October returns us to the standard release patterns for Monsterpocalypse. Over the summer, two new factions dominated the schedule for months, and one of them gets more to play with this month, but their place in the limelight is a bit contested by gribbly horrors from another dimension.

First off, let’s look at some apes. 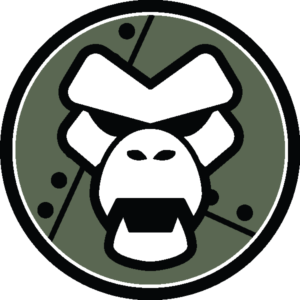 White Dajan is the third Empire of the Apes monster release, and designing this monster was a barrel of…fun. The first monster, King Kondo, is a ball of rage that slaps down any enemy that tries to come at him over the top of a building. General Hondo, on the other hand, is a tactical thinker who prefers to fight from a distance and let his units do more of the work. For this third ape monster, I wanted to explore some new space. As the ape with the least previous contact with civilization (not a lot of skyscrapers in the Himalayas, after all), I wanted him to be a bit more destructive. This is expressed in the combination of Demolisher and Wrecking Crew. Demolisher rewards him for knocking buildings down, and Wrecking Crew means he also likes it when his units attack buildings. The second thing I decided was that he should be the most cool-headed monster from his faction. This is reflected in his Steady rule, which shows he is much more cautious and difficult to body slam, and his lack of High Mobility. 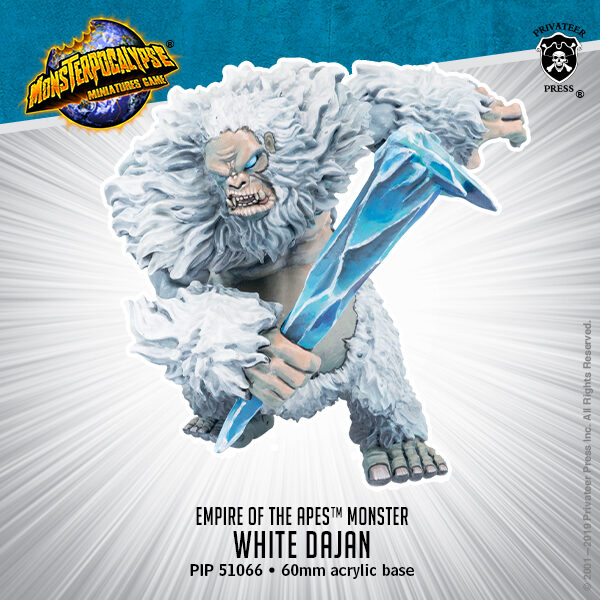 White Dajan’s most iconic element is his giant icicle club. I always love models armed with baseball bats, so I gave him the Fling rule on his brawl to show that he can bat units across the city.

When he goes hyper, he gets a little wilder. He gains High Mobility, so he can climb buildings and his speed increases. Monsterpocalypse is a setting where mystical powers exist alongside alien technologies, so it made sense to say White Dajan was connected to the elemental cold from his high mountain home. This is mostly reflected in his Treacherous Territory ability. Swirling snowstorms are stirred up by his rage, making it difficult for ground units to approach him. His club also gets stronger with Beat Back. I picture this as the ground around him becoming coated with ice, making it easy to send opponents sliding into nearby buildings.

Accompanying this frozen monster is a unit pack of high-flying apes.

Ape Bombers show off more of the faction’s ingenuity when it comes to repurposing human tech. They wear backpacks made of jet engines, making them capable of flying over the city to drop their surplus bombs on juicy targets. When determining the role for this unit, I went a few different directions. In the end, I wanted an anti-power base model to add to the Protectors. Destabilizer makes these ape aces better at attacking buildings than units, but Devastation ensures that any unit standing too close to the target structure will be caught in the blast and taken out. 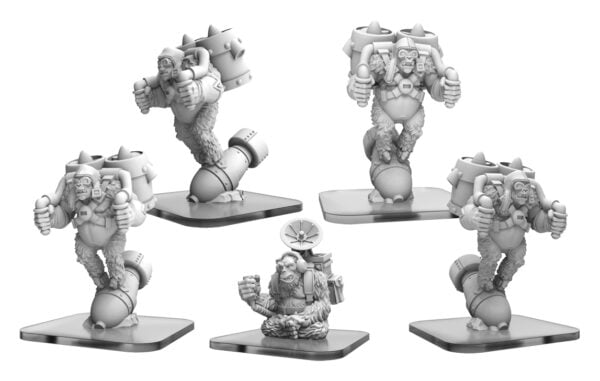 The Command Ape is the specialist in this blister, and I wanted it focusing on coordinating the actions of allied units around it. It can Hit & Run when necessary, but more important, it gives that ability to allied Faction units within two spaces of it. This lets Assault Apes punch enemies off of Objectives and then take their place. The Blitz action lets this ape order others around in a literal way, and it doesn’t even care if they are in its faction. With a Blitz, an allied model adjacent to the Command Ape makes an advance, doubling the speed of the chosen model with the right positioning. 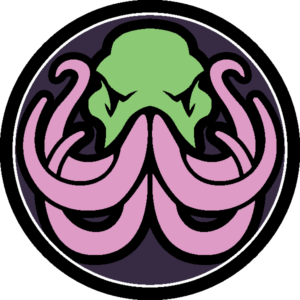 The Empire of the Apes got its reinforcements quickly, but other factions have had to wait a bit longer. Fortunately, The Lords of Cthul are very patient entities. Their third monster arrives in our reality with the release of Ulgoth. This model was one of my favorite sculpts from the last edition of the game, and he has returned in all of his unnerving glory. I knew what I wanted Ulgoth to do as soon as I started writing his rules, and it was all a little gross. First off, you can’t look at the model without noticing his enormous pustules. I imagine these as bubbles squirming with the lesser creatures that serve the monsters of this faction. So, I created the rule Gravid. In alpha, every time Ulgoth suffers damage, a Lords of Cthul unit spawns adjacent to him. This is a great way to double down with Cthul units if Ulgoth is paired with Cthugrosh or to ensure that you have plenty of units on the table when Ulgoth teams up with any other Destroyers’ monster. All the rest of his rules flowed from the concept that while the other monsters from this faction are focused on conquering our dimension, Ulgoth is here to reshape our planet. He has Disruption, reflecting his reality-twisting presence. His Brawl attacks have Manufacture, which places him solidly in the realm of unit support monster, much like Cthugrosh and Ares Mothership. His final Alpha ability is Unwieldy, which makes him difficult for other monsters to throw. 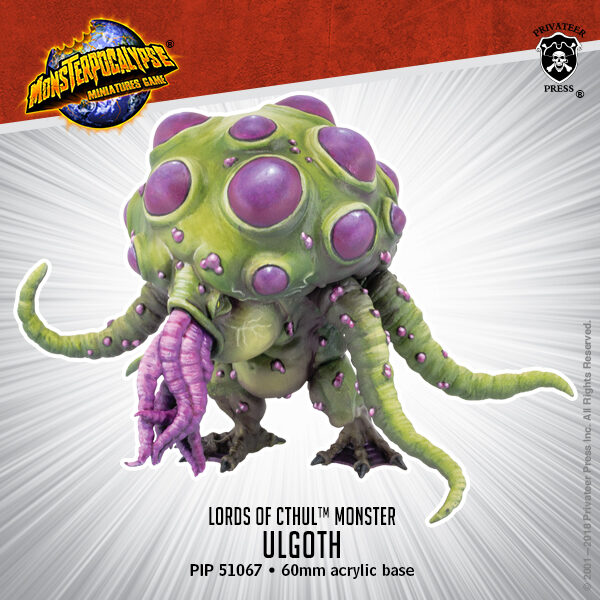 For Hyper Ulgoth, I wanted to show that his supply of back buddies has run out but that this only makes him more determined to change the landscape around him. Like his good counterpart this month, he also gains Treacherous Territory when he goes hyper. He also gains Chain Reactions on his brawl attacks. That means the unit he hits still gets manufactured into a Cthul unit, and then any units around it are destroyed in the reality-rippling shockwave. Finally, he gains Energy Drain on his power attacks. Ulgoth is the first super-defensive Destroyers’ monster, but he goes about being a tank in a much different way than a monster like Armodax.

The Lords of Cthul blister releasing alongside Ulgoth takes a lot of its inspiration from him.

The core of the blister is the Snatcher unit. This is a mainline brawler with a grunt and elite model. Snatchers are bulbous, like Ulgoth, but their girth is mostly air. These balloon-like units have High Mobility and the new Hover rule, allowing them to enter and stop on top of water and other impassable terrain. This doesn’t allow them to stop in a hazard without being destroyed, but it does let them secure buildings that other non-fliers can’t secure due to water. They also have the ability to Manufacture with their attacks. This was the classic role of Snatchers, and I saw no reason to adjust it for their debut in second-edition Monsterpocalypse. 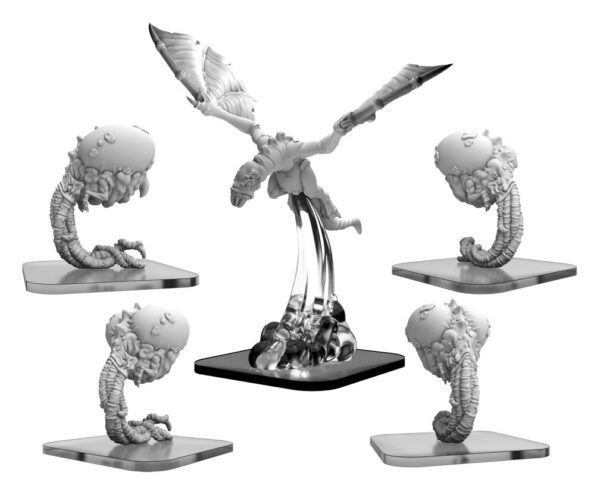 The specialist in this blister is a brand-new thing for the game’s setting and is a highly aggressive unit. When talking about this model during the concepting phase, I described it as a flying leech, which is a great description for its look and rules. The Hellion is a flier with very high speed but the lowest defense possible. This means that it can easily reach most targets, but it will have trouble staying in play if your opponent chooses to attack it. It has above-average dice for its brawl attack and the Penetrator rule, which means it can tackle higher-defense units by itself and is great at leading combined brawl attacks against enemy monsters. To add to the leech theme and provide an incentive for attacking monsters with it, I also gave it Siphon, a rule it shares with Yasheth. The final tool the Hellion has is Hit & Run. This can allow it to take ground previously held by its target but also put some distance between itself and any enemies.

And that is October Monsterpocalypse. You’ll be able to try these models out for yourself October 30th!